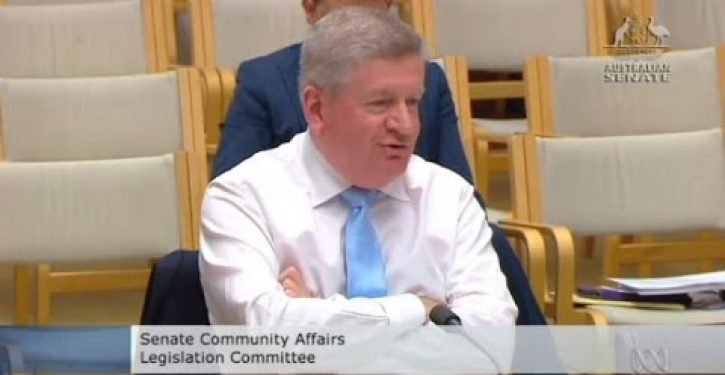 A viral video shows a conservative lawmaker in Australia savagely taking down a progressive female opponent after she accuses him of “mansplaining.”

Mitch Fifield, a member of the center-right Liberal Party, was debating Katy Gallagher, of the center-left Labor Party, during a committee hearing when Gallagher complained that he was engaging in “mansplaining.”

“I love the mansplaining, I’m enjoying it,” Gallagher said in a sarcastic tone. “By not answering the question, by repeating processes that are not related to the question that I’ve asked.”

“It’s the slightly patronizing and condescending way that you’re responding to my questions,” she responded. But Fifield had none of it.

“Well I would suggest, senator, that if you’re putting the word ‘man’ in front of some description of what I’m doing, you are doing that which I’m sure you’re very much against, [which is] making a sexist implication about how I’m conducting my role,” he said. “Imagine, senator, imagine if I said you were ‘womansplaining.’ Imagine the reaction, senator.”

Gallagher tried to defend her rhetoric by claiming “mansplaining” is “a term that’s used,” but it didn’t improve the situation.

“Is it by whom? By rude senators? By senators who are seeking to make gender an issue?,” he said. “Stop being a hypocrite. Conduct yourself appropriately for this place … Hypocrisy, thy name is Senator Gallagher.”