Many in the media have commented on Beyoncé’s politically charged performance during the halftime show at this year’s Super Bowl.

While it is true that her anti-police rhetoric was meant as an unsubtle nod to Black Lives Matter, the performer was using the bully pulpit afforded her at Super Bowl 50 to commemorate the anniversary of another black activist group that has engaged in terrorist plots. Like the Super Bowl, that group is also turning fifty this year. It is the Black Panthers.

Beyoncé is capturing attention for controversial political messages that were embedded in her Super Bowl 50 halftime show on Sunday night, with critics and fans debating over her dancers presumably being dressed like Black Panthers and making a black power salute. Performing her new song “Formation,” Beyoncé and her dancers were dressed in all black, wore black berets and, at one point, positioned themselves in an “X” on the field — something that some observers said was done in reference to Malcolm X, the Daily Mail reported.

One of the dancers was seen after the performance supposedly making a black power salute while holding a sign that read “Justice 4 Mario Woods,” as she was surrounded by other dancers who were doing the same salute.… In fact, the music video for “Formation,” the song which she performed during the halftime show, has some calling for boycotts. The video shows Beyoncé sitting and standing on what appears to be a police car submerged in water.

Beyoncés dancers in black berets at #SB50 paying homage to the Black Panthers 50 years after their #formation in '66 pic.twitter.com/YXpzBkkm6s

Mario Woods, should the name fail to resonate with you, was a gang member shot and killed by San Francisco police last December:

The encounter began after a stabbing victim arrived at San Francisco General Hospital yesterday to report that he’d been attacked at Third Street and Le Conte and that the stabber was still at large. Police responded and found Woods, who matched the description given by the victim, about six blocks away near the intersections of Third Street and Gilman Avenue in Bayview-Hunters Point at about 4:35 p.m. yesterday.

Still armed with the kitchen knife allegedly used in the stabbing, Woods was reportedly pepper-sprayed and shot with less-lethal beanbag ammunition but was still standing and refusing to surrender, according to police. Officers demanded he drop the knife, but Woods moved towards an officer who was approaching him, and was subsequently shot 15 times.

The article, at SF Weekly, goes on in predictable fashion to quote acquaintances of Woods who claim he “wouldn’t hurt a fly.”

As for the Black Panthers — now the New Black Panthers — their words and deeds precede them. Last year, they threatened year to “creep up” on Houston police “in the darkness” and in 2014 they plotted to blow up the St. Louis arch (for which attempted act of terror, please note, then-Attorney General Eric Holder ordered them indicted on minor gun charges).

In short, the Black Panthers, new and old, are terrorists. Shame on Beyoncé and her entourage for failing to see them for who they are.

Clean-up on Aisle H
Next Post
Students at U. of Wisconsin-Madison demand black WHAT? 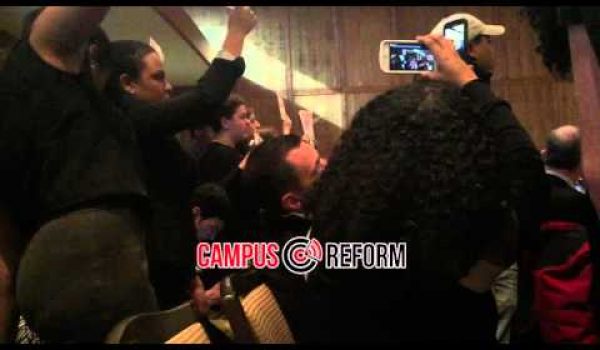