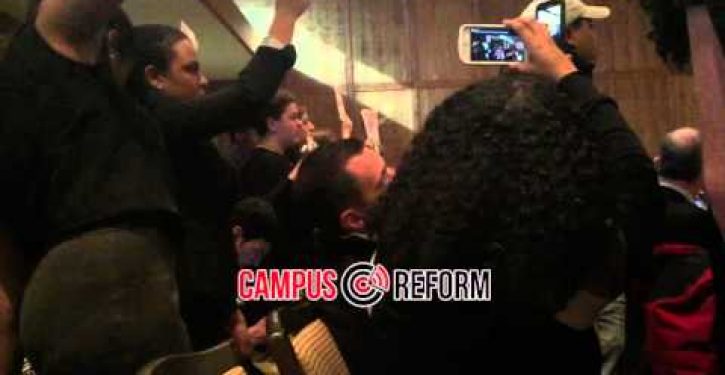 On this much we can agree: A group of loud, angry, and mostly black students at the University of Wisconsin-Madison needs help. Who should provide that help was the question that inspired their disruption last Friday of a meeting of the school’s Board of Regents.

Campus Reform notes that the demonstration, called a “Blackout” (get it?), began with the de rigueur round of chanting, in which a student leader shouted, “I say” and was answered with the word “power!”

At length, the group got around to making its demand, which was unusual to say the least. It begins at around 0:41 in the video below. A transcript follows:

In its guide to choosing a mental health professional, the Mayo Clinic examines a great many variables, such as the type of training, the nature of the problem, and pragmatic issues such as fee and insurance coverage. Nowhere in the list of recommendations is one for choosing a therapist based on racial identity. The reason for that, as any mental health professional will tell you, is that it makes no difference. A white therapist is just as capable of treating a black person as a black therapist is of administering treatment to a white patient. And so on, with regard to gender, ethnicity, and virtually all other demographic categories.

But that’s not really what the Blackout was about. It was about throwing a tantrum and crying racism, which has been an effective tool of late for shaking down college administrators and eliciting all sorts of ridiculous concessions on campuses throughout the nation.

As it turns out, the UW-Madison students needn’t have bothered since the school’s administration has been active in addressing racial grievance independently of prodding from students. In 2014, the powers that be implemented a system for “redistributing grades” based on race. And last year, administrators proposed a solution for “over-policing” in the Madison community at large. Their idea? To stop treating shoplifting as crime.

Was Beyoncé’s Super Bowl halftime performance a tribute to this terrorist group?
Next Post
Reports: Christie will suspend his campaign for president today