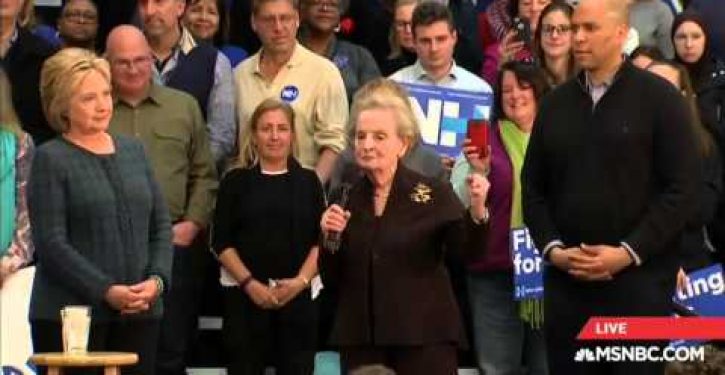 It was not quite a month ago that Barack Obama renewed his call for a more civil national dialogue. During his State of the Union address, the president asked all Americans to debate politics in a way that “reflects the goodness and decency and optimism” of America.

No sooner had Obama offered his plea than he returned to his own uncivil ways, quipping, “I know some of you are antsy to get back to Iowa” and accusing those who speak ill of America’s economy of “peddling fiction.”

Yesterday, another Democrat picked up where the president left off. The Daily Caller’s Chuck Ross notes that Madeleine Albright, who served as secretary of state under Bill Clinton. Speaking at a Hillary Clinton rally in New Hampshire and noting that some women have expressed doubts about casting their vote for the former first lady, the 78-year-old Albright chastised them with the reminder that “there’s a special place in hell for women who don’t help each other”:

Clinton herself was asked about the comment today on “Meet the Press” with Chuck Todd. She laughed off the remark, stating:

Oh, you know, as you remember Madeleine has been saying this for many, many years. She believes if firmly. In part because she knows what a struggle it has been and she understands the struggle is not over. So I don’t want people to be offended what she is expressing as her—”

When Todd interrupted, asking “Do you understand why some might have been offended by it?” Clinton fired back:

Well, good grief, we’re getting offended about everything these days. Honest to goodness. I mean, people can’t say anything without offending somebody.

It sounds almost as if Clinton is attacking political correctness. Who knew she was an advocate for people speaking their mind!