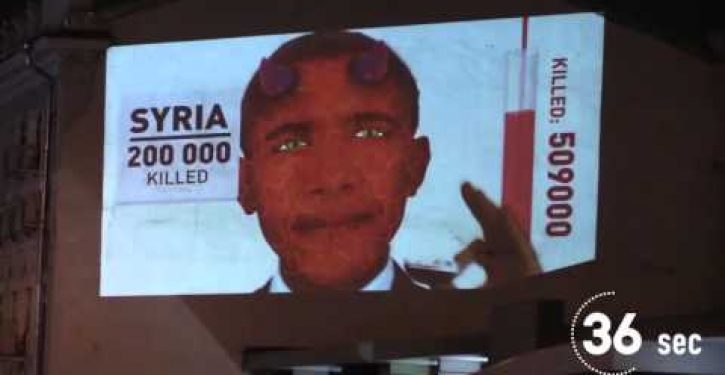 OK, so we already knew the Russians take a dim view of President Obama.

And we knew they do satire with a heavy hand.  (I mean, really.  Where’s a sophomore when you need one?)

The YouTube video below shows what the Washington Times recounts: early on Friday morning, a video of Obama munching on the peoples of foreign countries was projected onto the sides of buildings in Moscow.

It was clearly intended to be seen and understood by Americans (and others), since the big captions are in English.  The video ends with a banner reading “Obama welcome to the Hague tribunal in 2016.”

As TWT notes, it was first projected onto a building surface close to a McDonald’s in central Moscow.

I’m taken with one particular little touch, myself.  The horns grow on Obama’s head as he ingests more countries’ “war dead.”  (Again, my kingdom for a sophomore.  Somebody to exercise some editorial judgment about the cutesy elements of this satire, which in typical Russian style are being piled on with a forklift.)

The “reset/overcharge” button with Russia?  The Cairo address to the Muslim world in 2009?  The public flagellation of America’s supposedly imperialist self-image, overconfidence, false belief in national exceptionalism?

“Leading from behind”?  Refusing to countenance “military solutions” – to anything, including military problems?  Ranting about the Crusades?  Pointing out that we can’t impose our values/solutions/culture/cheeseburgers/whatever on the rest of the world – as if that’s a policy position that needs clarifying?

The Obama administration has done it all.  And yet, it’s not Ottawa or Toronto, London or Brussels or Berlin, where some avant-garde lefty videomaker is depicting Obama as a devil with horns, snarfing down the dead of the world’s nations.

It’s Moscow.  It’s in Egypt – scene of Obama’s 2009 speech – where a popular TV host accused Obama of facilitating Islamic terrorism, and said he should be tried and executed.  (Egypt is also where Obama was depicted as Satan in 2013.)

An editorialist in the Palestinian Authority-administered West Bank took Obama to task in 2014 for being “a sadist from the times when the whites persecuted the blacks.”

Iran’s supreme leader, for his part, tweeted an image showing Obama in July 2015 – 11 days after the nuclear “deal” was announced – committing suicide with a gun to his head.  Even for the radical mullahs, this is not a manifestation of amity or a new spirit of cooperation.

In 2013, Iran also mounted a huge side-of-the-building billboard depicting Obama alongside a villain from Shia tradition, appearing to offer a false “letter of protection” to the Iranian people.  The Guardian referred to it as “’high-context’ propaganda” – which I suppose it is, since it takes a rather lengthy explanation to get the point.

The Russians don’t outdo the Iranians in being high-context.  They may, however, outdo the other nations in feeling animosity toward Americans again – as opposed to just portraying a particular American president as Satan.

We should probably send John Kerry and James Taylor to Moscow to patch things up.

The attempted stickup was run-of-the-mill, the identity of the robber anything but
Next Post
F-35 makes its first trans-Atlantic crossing 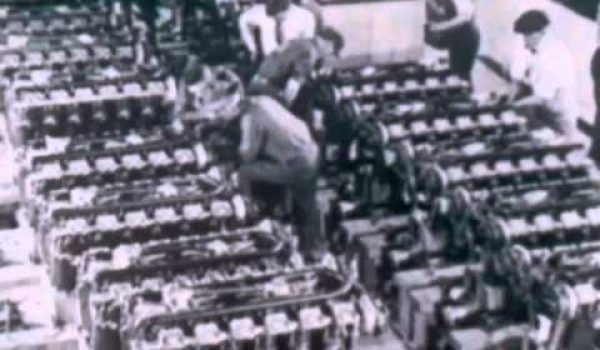