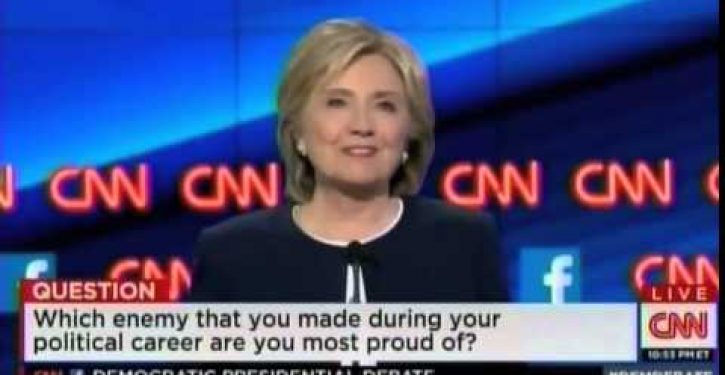 Maybe she isn’t joking. Maybe Hillary Clinton does view Republicans as her biggest enemies. If nothing else, they provide with her a good belly laugh every time she or someone in her presence mentions them.

Here are several videos in which Clinton is either declaring though gales of laughter that the GOP is the devil incarnate or collapsing in a fit of giggles at the thought of physical violence to one or another Republican.

At a campaign event in New Hampshire, a supporter told Clinton that he sometimes wanted to strangle Carly Fiorina. Rather than denounce the man’s “war on women,” Hillary chortled right along with him.

Just yesterday at a Democratic town hall, one voter suggested he would have liked to see Donald Trump reach over and “punch” Chairman Trey Gowdy in the face during the Benghazi hearing. Again, the Queen of the Cackle thought such violence was hilarious (Hillarious?).

Some people at least, didn’t find the topic of Benghazi to be all that funny.

@HillaryClinton laughs and says "I came out of that ok" about #benghazi?? Seriously?? 4 people DIED and you laugh?? #DemTownHall

To be sure, had Republican voters or candidates said anything vaguely similar to the above rhetoric, they would have been pilloried from sea to shining sea.

Cartoon of the Day: Who’s counting?
Next Post
Image of the Day: Sanders and socialism, summed up