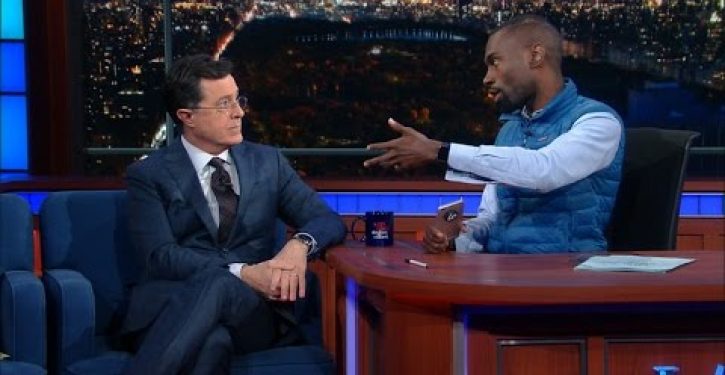 I was reading at Mediaite that Stephen Colbert, host of the “Late Show” on CBS, had #BlackLivesMatter activist DeRay McKesson on as a guest on Monday, which happened to be Martin Luther King, Jr., Day.

Right off the bat, there’s a big disconnect there for me. I’m inclined to share the view espoused by Roger Simon of PJ Media, who wrote that “Dr. King would not have taken so kindly to the ‘Black Lives Matter’ movement.”

To expand on that point briefly, I would hazard a guess that King would have been appalled at BLM’s overt endorsement of violence toward white people and police. The famed civil rights leader would almost certainly have taken exception to some of the positions McKesson himself has advocated, such as his justification of looting by blacks.

None of this of course would resonate with a diehard liberal like Colbert, who practically sang hosannas to McKesson during his eight minutes on stage.

But things really got interesting when McKesson challenged Colbert to own his white privilege. Colbert capitulated, declaring:

I can’t speak for other white people, but I feel guilty for anyone who doesn’t have the things I have. That includes black people or anyone. I am so blessed, there’s always a fear it’ll be taken from me.

And to show he meant what he said, he stood up and offered literally to change places with McKesson, giving up his “host’s chair” and relocating to  the sofa.

So that’s all it takes? Hell, I’ve been laboring under the misconception that libs needed to undergo some act of self-flagellation or contrition to acknowledge their white privilege. In Colbert’s case, I would assume that means handing over at least a portion of the $45 million reported as his net worth.

Here, meantime, is the video:

Feds build $75 million center … for wrong agency
Next Post
Cartoon of the Day: Wake up, America