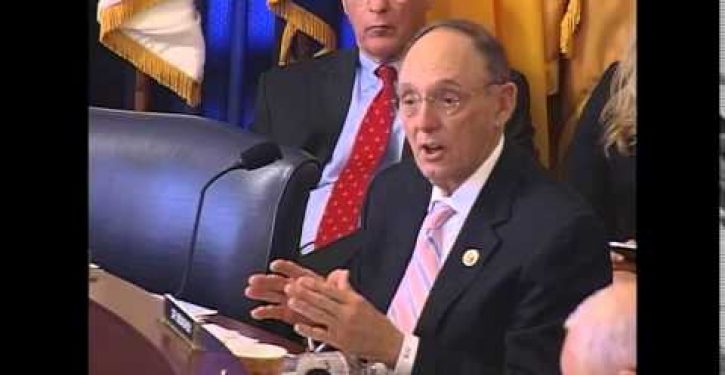 It might have been funny when Barack Obama boasted improvements in veterans care during his final State of the Union address if it were not so tragic.

The latest horror story associated with Obama’s Department of Veterans Affairs focuses on a former hospital director who was paid $86,000 to resign after Deputy Secretary Sloan Gibson determined he had retaliated against a whistle-blowing subordinate who reported him for doing little work, The Daily Caller News Foundation found.

Other offenses that preceded the generous parting bonus paid out to Japhet Rivera included having sex with a female VA employee and then repeatedly talking about the goings-on to her daughter, who also worked there. When the daughter said she didn’t want to hear it, he wrote that she might have to “live the rest of your life without a mom,” the VA said in Rivera’s firing paperwork.

The VA repeatedly told Congress in recent years that it doesn’t need new management powers to fire bad workers, but Rivera, a high-level, non-union employee, prevented his firing on a technicality by appealing to the Merit Systems Protection Board. The MSPB is a small federal panel that hears cases involving allegations of violations of civil service employee rights.

Instead of removing the director of the VA Illiana Healthcare System in Danville, Ill., by firing after Gibson’s own investigation found serious misconduct, the VA then paid him the $86,000 lump sum, plus expenses, in exchange for his resignation, while telling no one what had happened.

VA spokeswoman Walinda West did not dispute the settlement’s existence.

“They tried to fire me, but because of my rights to go to the MSPB to review the case, an administrative law judge reviewed the case and she was about to send me back to work for a couple of [reasons],” Rivera told TheDCNF, adding:

One was the VA failed to provide all the information that they used to make a decision. It really wasn’t all that important … but at any rate they didn’t provide it to me, so that was a major [reason the judge sided with me].

She was going to return me to work and the VA said they just wanted me out of there. Under the agreement for my resignation, the VA gave me seven months of pay and all my expenses. … They also paid for the attorney’s fees and basically everything.

The firing-turned-jackpot came in May 2015, only 14 months after Rivera arrived at the Illinois hospital, with the VA paying his moving expenses when he arrived, on top of a $147,000 annual salary.

Rivera was previously deputy director of the VA Caribbean Healthcare System in Puerto Rico, and he said the department promoted him to a director role in rural Illinois to get him out of Puerto Rico where he was being investigated for other misconduct allegations.

Rivera said the Puerto Rico investigation was retaliation against his own whistle-blowing, triggered by reporting his new boss there for misusing VA resources to ship personal belongings. The new boss had been similarly shuffled to Puerto Rico from elsewhere in the department.

With his boss wanting him gone, he was “detailed” to “Orlando where I was in a hotel collecting a per diem to do a job that a secretary could do,” Rivera told TheDCNF.

He was then exiled to Kansas, an apparent punishment that turned into a promotion when he was made director at the Illinois hospital.

By May 2015, barely a year later, Rivera was no longer there, leaving Illiana searching for its fourth director in seven years. But the VA refused to tell the local paper, the News-Gazette, what happened with Rivera, and whether he was fired or quit.

In October 2015, the response to a Freedom of Information Act request by the News-Gazette revealed some of the story.

Among other incidents with female employees, Rivera repeatedly sent “detailed information about your personal romantic relationship with” a VA employee to that woman’s daughter, who was a “student trainee” at the VA, Gibson wrote in April 2015.

In December 2014, there had been an “administrative investigation into whether you were engaging in inappropriate relationships with other VA employees,” Gibson continued.

In January 2015, the human resources officer also reported Rivera to the regional VA headquarters for being generally AWOL, saying he was “not responding to emails, not signing correspondence and not making timely decisions.”

The regional headquarters told Rivera who had tattled on him, and Rivera called the HR person in for a “private meeting” where he said he “heard about [her] complaints regarding your failure to do your work and subsequently told [her] you were preparing paperwork for [her] termination.”

This “could reasonably be perceived as retaliatory and is conduct unbecoming a Senior Executive,” Gibson wrote.

The next month, he wrote that “rour lack of remorse and your failure to take any responsibility for your misconduct have convinced me that you are not an appropriate candidate for rehabilitation.… [T]he only appropriate penalty is your removal,” noting that he would be placed on paid leave while he prepared appeals to various bodies.

Soon after Rivera filed an appeal, the VA shifted from firing him to paying him a huge sum of cash, plus paying for his lawyer’s work on the appeal, all while saying nothing negative about him publicly.

Rivera, who said some of his comments were taken out of context in the firing paperwork, is still living off the settlement money, though he says he can’t find new work, and splits his time between Florida and Puerto Rico.

He said he believes the department gave him the settlement, and later omitted that fact from the local paper’s FOIA request, because it did not want to give Congress the impression that it did not have the ability to get rid of problem employees.

The VA has actively opposed several bills to make it easier to fire bad VA workers.

In August, three months after Rivera’s departure, VA Secretary Bob McDonald acknowledged to Congress that he knew it was not allowed to pay off bad government employees to quit.

He also said he already had the “tools” he needed to fire them.

Gibson, who was deposed as part of Rivera’s appeal, told Congress last month that “we make it clear consistently that retaliation against a whistle-blower will not be tolerated.”

Gibson’s letters to Rivera show a mass of evidence, as many of Rivera’s communications were electronic. Multiple lengthy investigations had been conducted, and they moved to fire him on three separate charges, some including multiple instances of misconduct each. They only needed some to stick.

The HR manager reported him for neglect of duty and he immediately called her in to his office and told her she would be fired, Gbson wrote–begging the question of what standard of proof is needed to fire a retaliator, short of having all interactions between VA staffers video recorded.

Asked “what additional legislative authority you need to … discipline retaliators,” Gibson declined to call for changes to the existing personnel system.

The amazing reason a federal court ordered NYPD to purge documents on terrorist investigation
Next Post
Cartoon of the Day: Stranger than fiction