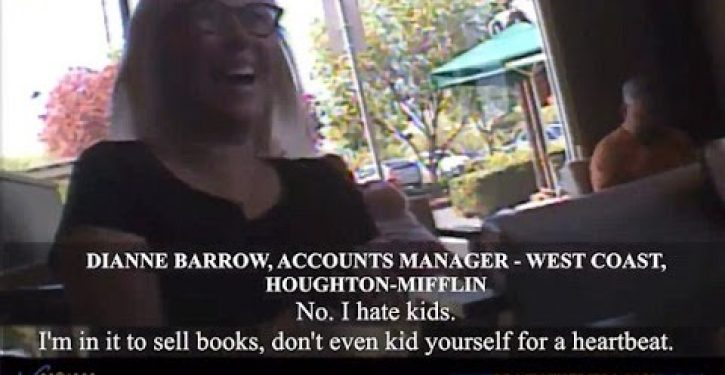 That’s what the man the left loves to hate, James O’Keefe of Project Veritas, discovered in his most recent candid camera segment.

The Daily Mail, which broke the story, notes that the “guerrilla video crew that exposed Obamaphone cheaters and shut down the left-wing advocacy group ACORN” has exposed “Common Core’ education standards as a scheme for publishers to sell more textbooks.”

The West Coast sales manager from one of the nation’s biggest school book sellers, Houghton Mifflin Harcourt, told an undercover muckraker with Project Veritas that ‘I hate kids.’

‘I’m in it to sell books,’ Dianne Barrow said of her advocacy for Common Core. ‘Don’t even kid yourself for a heartbeat.’

‘You don’t think that the educational publishing companies are in it for education, do you? No, they’re in it for the money.’

A rather foul-mouthed Brooklyn schoolteacher is also interviewed in the exposé.  Jodi Cohen told PV’s investigators”

‘It’s bulls**t and the thing is, what they do is they create some new f**king system, that f**king sucks to sell more books and then we have to learn something new with the students.’

Montage: 140 unfulfilled Obama promises from past SOTUs
Next Post
Cartoon of the Day: Building on failure