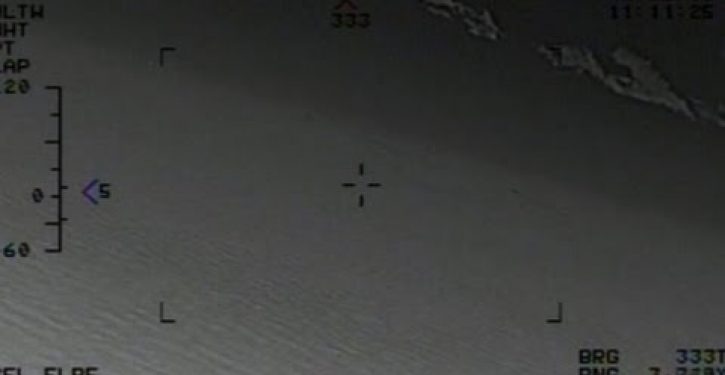 If you were wondering if those rockets fired by the Iranian fast boat in the Strait of Hormuz in December were as much of a provocation as the U.S. Navy said they were, wonder no more.

They were – and then some.

In response to a FOIA request by Military Times, the Navy this weekend released infrared video of the rocket launches.  The video was obtained by a Seahawk helicopter (probably from USS Bulkeley, DDG-84, the Aegis destroyer serving as escort for the carrier USS Harry S Truman (CVN-75)).

We catch a glimpse of Bulkeley between the :04 and :06 mark in the video, making a turn a couple of thousand yards astern of an oil tanker, which the Seahawk’s IR sensor then zooms in on.  The tanker lurks in the foreground (although not always visible) for most of the rest of the video.

If the tanker’s crew got through this event without any heart attacks, more power to them.  Many of the news media have primly stated that “the Navy said” one of the Iranian small boats, which are assembled a couple hundred yards off the tanker’s starboard bow, launched rockets – seeming to suggest that the media outlets are having to take the Navy’s word for that.  But looking at the video (below), there’s nothing dubious about it.

The Iranian boat unquestionably launches several rockets – in extremely close proximity to the tanker, and on such a trajectory that the rockets can be presumed to have landed close to Bulkeley, and to the carrier (probably astern of Bulkeley’s and the tanker’s positions in the traffic lane), just as the Navy said in its earlier briefing.  The Navy’s original statement was that the rockets landed as close as 1,500 yards from Truman.

(Truman is never visible in the video, but given the tactical circumstances, can be assumed to have been astern of the tanker and Bulkeley.  Bulkeley, which would precede the carrier through the strait, has a good wake on in the video, and looks to be maneuvering urgently to get between the Iranian boats and the carrier.  The French frigate, Aquitaine, is probably in formation with the carrier, positioning to Truman’s starboard: the side of the ship exposed to the Iranian coastline during an inbound transit.)

If you’re not clear on this, sending fast patrol boats out into the traffic lanes in the Strait of Hormuz and having them launch rockets within a few hundred yards of the passing ships is just like sending a mobile artillery vehicle out, right next to the Capital Beltway on the edge of Chevy Chase or McLean, and having it launch rockets within a few dozen yards of all the commuters and soccer moms.  It’s exactly that dangerous, stupid, and slap-upside-the-head, sock-in-the-gut-with-a-tire-iron irresponsible.

What is there to be done about it?  Glad you asked.  Because that question isn’t about law.  It’s about leadership.

Here’s the deal.  If the U.S. Navy had dealt with this problem by sinking the Iranian boat that was firing the rockets, and warning the others that they’d get the same if they didn’t leave immediately, the aftermath of that solution would depend on how much leadership the U.S. continued to show.

International maritime law exists, of course, but it doesn’t prescribe what to do if a littoral nation decides to make up scenes for a new Jackass: The Movie in an international strait.  Its function, rather, is to address situations in which littoral nations aren’t doing that.

If littoral nations – the ones with coastlines along international straits – start pushing the envelope, presenting rest-of-world maritime traffic with safety problems that there are no hard-and-fast written solutions for, “applying law” isn’t the answer.  The only effective answer is political leadership.

Somebody has to step in and say, “You’re not going to do that again.  Period.  Because I say so.”  There’s no “law” to hide behind, if we want the outcome to be that Iran is deterred from pulling these extreme shenanigans.  There is only the responsibility of armed intimidation and credibility of will.  We have to stick our necks out, and back up our own play to the last ditch.

The good news is that all the other nations would be relieved to have us do that.  Sure, some of them would whine and complain.  But none of them has the power – even now, in our compromised state – to actually do anything about it.  And the nations whose implicit support matters would all give it (by keeping their objections perfunctory, if they made them at all).

Other nations, like the UK and our Commonwealth allies, might decry the ugly situation, but could be expected to stand with us explicitly, on the principle that you don’t negotiate or ignore such seriously dangerous bad behavior.  You squash it like a bug immediately, before it becomes an infestation.

Regarding the established rights and wrongs, the Strait of Hormuz is narrow enough, at its narrowest point, that the center line between Iran and Oman is less than 12 nautical miles from each coast.  For a period of time, traffic going through the strait is in the territorial waters of either Iran or Oman.  (See map.)  The Navy hasn’t told us exactly where this incident occurred, but the likely location seems to be the western traffic scheme in Iranian waters.  That’s the one that would allow the Iranian boats to snuggle up close to the inbound traffic, as seen in the video, before launching rockets.

The transiting third-party ships are required to show good faith to retain their right to innocent passage in the strait.  They mustn’t make threatening moves toward the littoral nations, or involve themselves in violations of the littoral nations’ laws.  They have to stick to the conventional traffic scheme and comply with notices to mariners.  Experienced mariners – including the ocean-going navies, and tanker drivers in the global oil trade – are well-versed in the expectations for international straits, and are typically reliable and observant.  The littoral nations are expected, meanwhile, to keep their laws reasonable, and not impose undue burdens on shipping in terms of compliance.

The Iranians might well claim that they can do what they want in their own waters, and it’s quite true that the Law of the Sea doesn’t say they can’t announce a rocket launching exercise in their waters and then start launching 20 minutes later.  Nor does it say they have to observe any particular separation from international-strait traffic when they launch rockets.

But the viability of the international order, including aspects of it like the Law of the Sea, depends on the nations being able to expect a certain level of responsible behavior from each other.  The significance of an event like this one is precisely that it attacks not the letter of the law, but the spirit of order itself.

International law doesn’t have an answer for this situation.  This is a situation for leadership.  Unfortunately, the very fact that Iran was emboldened to do this means that leadership would have to take the form of force, as well as will, to be effective.  Iran was cruising for a good boat-sinking at the end of last month, and frankly should have gotten one.  But that didn’t happen, and we can expect the next probe at the seam between law and leadership to be even worse.