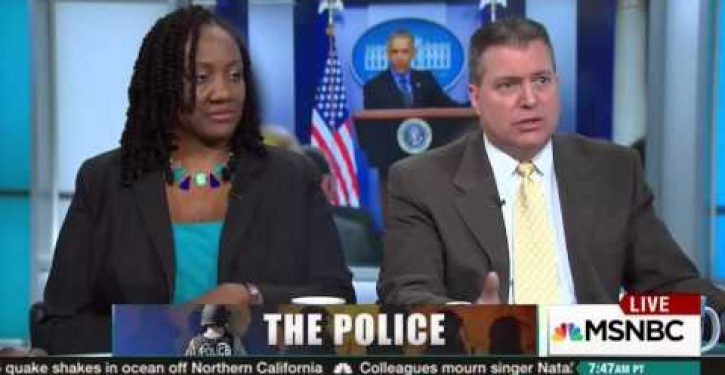 When it comes to cable news stations that lean left, it’s no mean feat to identify the dumbest thing to come out of the mouth of a host or guest.

That being said, my previous candidate for dumbest comment was the one uttered by CNN “political analyst” Marc Lamont Hill in response to the beheading of an Oklahoma woman by a radical Islamist co-worker.

Rejecting the compelling evidence that the murder was an act of terrorism driven by religious fervor, Hill proclaimed, “That’s absurd. People behead for all sorts of reasons.” [Emphasis added]

Yesterday, Hill’s remark was displaced by an observation by MSNBC’s Melissa Harris-Perry. The topic was another hot button issue — gun control — and Harris-Perry was squaring off against Jon Shane, a former police officer who is now a professor of criminal justice at John Jay College in New York.

Here is a video that includes the dialog that led up to Harris-Perry’s gem. The transcript follows:

Melissa Harris-Perry: Shouldn’t officers be the number one folks behind gun control?

Jon Shane: Well, you do have a lot of second amendment officers. I happen to favor carrying a gun myself. I don’t think there’s much wrong with it. The reality is how are we going to keep the illegal guns away from people? It’s a very easy thing to do to keep guns—

It was at this point that Harris-Perry cut off Shane to declare that “a lot of people shoot their wives with perfectly legal guns.”

Hard to top that one.

DC politician calls man ‘white supremist’ [sic] for live-tweeting a meeting
Next Post
Teen made $1,100 selling nude photos and videos of herself online