A low-level District of Columbia politician long known for her crazy antics recently stormed out of a meeting and called a man a “white supremist” [sic] for tweeting about the meeting.

“You know something? You do this deliberately. I know you sit here, sit here innocently like you’re just recording something. But the whole goal is that you, this white supremist [sic] here,” Henderson says before being interrupted by shouts of “oh, wow” and “what?” from shocked attendees.

Nick Russo, the man Henderson lashed out at, records the meetings in their entirety and posts them on his website, Ward 5 Archive, according to the Washington City Paper, which first reported the interaction.

“Yeah, and that’s what you are,” Henderson continues. “You are. You are. You’re a white supremist. Your little blogs and your listservs.”

Again, shocked, an unidentified meeting attendee responds, saying, “and the truth comes out.”

Henderson then stormed out of the meeting. She returned shortly after with a police officer and instructed the officer to arrest Edward Milton, a man who routinely records meetings.

The officer refused to escort Milton out of the meeting after other ANC members came to his defense.

Henderson may be best known, though, for her efforts to stop white supremacy by protesting “bars and progress” in her neighborhood. She has launched several campaigns to, in her own words, “keep empty lots and ensure the neighborhood stays” the way it is.

#STANDWITHKATHY and help protest neighbors who open businesses without my consent!!!! pic.twitter.com/PzVYVSVWkB

I'm sick and tired of outsiders and newcomers opening businesses that cater to others. I'm protesting @bardobeer! pic.twitter.com/d7SNvH1Gas

It is evident @wcp has been duped by a cohort of white supremacists set on bringing bars & progress to my community! https://t.co/rBRwGFDxBT

In the past, Henderson has been accused of aggressively campaigning inside polling places, which is illegal in D.C., and vandalizing signs of political opponents.

In 2012, police had to be called to a school that doubled as a voting location after Henderson apparently attacked a man while he was voting, according to the Washington Times.

“She started attacking people, running up to them and harassing them,” Darlene Glymph, a candidate running against Henderson, told the Times.

People reportedly said Henderson was walking around the school handing out fliers that criticized her opponent for being a Republican.

Henderson denied passing out the fliers, but told the Times she was “absolutely yelling” inside the polling place.

In 2010, in an even more bizarre episode, Henderson was caught on camera ripping Harry Thomas, Jr. and Kwame Brown campaign signs out of the ground in front of a popular Capitol Hill diner and replacing them with signs for Adrian Fenty.

At the time, Henderson, Thomas and Brown were candidates for D.C. Council and Fenty was running for mayor.

In an effort to downplay her role in the sign stealing escapade, Henderson concocted an elaborate excuse in which she was the victim of sabotage by the owner of the diner.

In a statement released after the incident, Henderson claimed the owner of Capital City Diner, Matt Ashburn, asked her to remove the signs and replace them with Fenty signs.

“At some point after Ms. Henderson left the Diner Matt Ashburn contacted Councilmember Thomas and together they devised a scheme to accuse Ms. Henderson of removing the signs without permission,” the statement read.

According to Henderson, Ashburn and Thomas knowingly fabricated the incident to undermine her city council candidacy. Henderson also believed that the two exchanged money in the elaborate scheme.

“I don’t know what Mr. Ashburn may have been paid or offered in exchange for participating in this deceitful scheme. I look forward to a thorough investigation of this matter, which will prove that I did nothing wrong,” Henderson wrote.

Ashburn, though, called the allegations “crazy” and said he was just trying to get Henderson out of his restaurant, where she was bothering customers, The Washington Post reported.

“I in no way encouraged her to remove the signs. There is nothing I would have said, in my opinion, that any reasonable person could have taken as permission to remove those signs,” he told the Post.

Henderson’s sign-stealing campaign later became part of a libel suit against her. Henderson lost and the city seized a condo she owned worth more than $140,000 to pay for damages.

The Daily Caller News Foundation reached out to Henderson for comment regarding this story, but got no response.

In its triumphal reporting that terrorist video did name Trump, MSM omits other ‘dishonorable mentions’
Next Post
Melissa Harris-Perry’s argument for confiscating legal guns is a howler 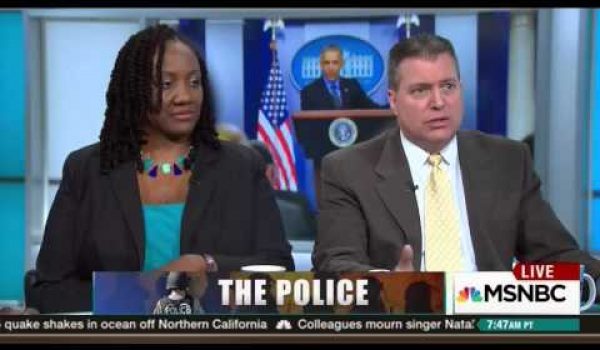