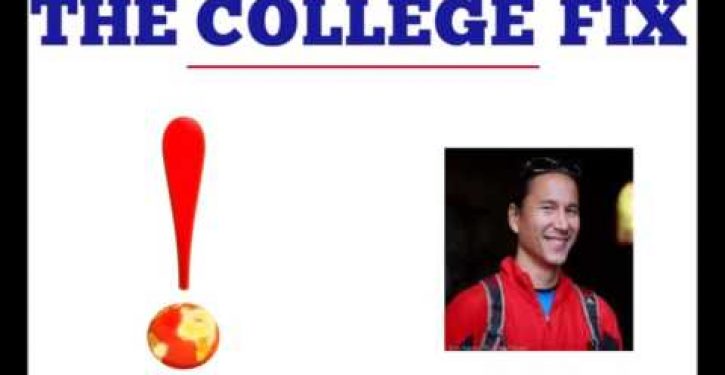 A professor at the University of Massachusetts-Amherst told his students earlier this month that human beings are in the midst of a “sixth mass extinction,” according to audio obtained and published Tuesday by The College Fix.

“We humans are creating the conditions for our own extinction as a species,” Timothy Pachirat, a comparative political science professor, told his students on the last day of class. He also stated that meat eaters contribute to global warming, because, he said, eating animals shows that “we are living in a period of more suffering than the world has ever known.”

Geologists have roundly criticized the belief in a sixth mass extinction theory in the past.

“When organisms challenged by climate change respond by adapting, they evolve,” Stewart Brand, the president of the Long Now Foundation and co-founder of the Revive and Restore project, wrote in an essay published at AEON:

When they move, they often encounter distant cousins and hybridize with them, sometimes evolving new species. When they die, they leave a niche open for other species to migrate or adapt into, and a warming climate tends to open the way for more species rather than fewer.

Bringing up the 19th century population boom, Pachirat noted that the human population has spiked since the Industrial Revolution, bringing with it a thirst for fossil fuels, which, he said, released carbon out of the ground and deposited into the air that had been trapped underground.

Pachirat, who, according to the University’s website, studies politics and power, went on to ask the students to consider the role humans have played in the environment — in a sense, telling the students that many of the economic gains wrought by agricultural and industrial innovations over the past 200 years have been a bane to humanity.

Pachirat, for his part, concluded his remarks with a warning, telling his students, in effect, that they are condemned to extinction if they don’t stop polluting the planet and eating livestock:

You do not have to be an animal or a plant lover to take this argument seriously. You could be the most narcissistic, anthropocentric, selfish jerk on the planet and this issue should still be of interest to you. It’s not inconceivable.