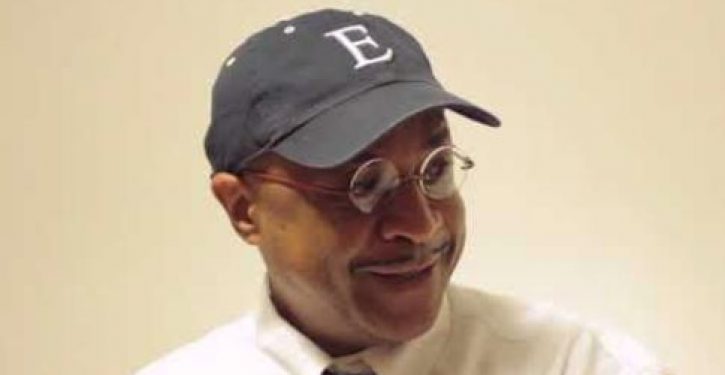 The title of this post was inspired by an open letter of sorts that ran in the New York Times on Christmas Eve.

Its title was “Dear White America.” The author of the piece, George Yancy, teaches philosophy at Emory University, according to his bio.

He is also black, which he feels (as apparently did the Times editorial board) somehow gives him special license to psychologize every white person alive and read him the riot act.

He will, of course, deny that this is what he is doing and even begins his missive by urging white readers to “listen with love” or “at least try.” Later on, he explains that his letter is “a gift” to us.

He spends the next few paragraphs establishing his bona fides as a moral arbiter by revealing himself to be a dyed-in-the-wool sexist. The message underlying this admission is clear: If he is willing to own up to his own bigotry and biases, then whites — every last one of whom is racist — should be willing to do the same.

Next comes a demand couched as a request:

If you are white, and you are reading this letter, I ask that you don’t run to seek shelter from your own racism. Don’t hide from your responsibility. Rather, begin, right now, to practice being vulnerable. Being neither a “good” white person nor a liberal white person will get you off the proverbial hook. I consider myself to be a decent human being. Yet, I’m sexist. Take another deep breath. I ask that you try to be “un-sutured.” If that term brings to mind a state of pain, open flesh, it is meant to do so. After all, it is painful to let go of your “white innocence,” to use this letter as a mirror, one that refuses to show you what you want to see, one that demands that you look at the lies that you tell yourself so that you don’t feel the weight of responsibility for those who live under the yoke of whiteness, your whiteness.

I can see your anger. I can see that this letter is being misunderstood. This letter is not asking you to feel bad about yourself, to wallow in guilt. That is too easy. I’m asking for you to tarry, to linger, with the ways in which you perpetuate a racist society, the ways in which you are racist. I’m now daring you to face a racist history which, paraphrasing [James] Baldwin, has placed you where you are and that has formed your own racism. Again, in the spirit of Baldwin, I am asking you to enter into battle with your white self. I’m asking that you open yourself up; to speak to, to admit to, the racist poison that is inside of you.

Several paragraphs later, he tries to anticipate the objections that will be raised. He expects there will be comments by angry, sarcastic readers who accuse him of being “just an angry black man” or question why he isn’t “telling black people to be honest about the violence in their own black neighborhoods?”

The second question sounds perfectly reasonable, but if you ask it, “then you’ve already failed to listen.” How convenient it is for him to be judge and jury, to stack the deck in his own favor, to be in sole possession of a coin that reads “Heads, I win” on one side and “Tails, you lost” on the other.

Rather than answer Yancy directly, I will direct him to another Times article, this one an op-ed in this morning’s paper by Arthur C. Clarke, who asks a trenchant question:

[W]ho cares if we are becoming a culture of victimhood? We all should. To begin with, victimhood makes it more and more difficult for us to resolve political and social conflicts. The culture feeds a mentality that crowds out a necessary give and take — the very concept of good-faith disagreement — turning every policy difference into a pitched battle between good (us) and evil (them).

Consider a 2014 study in the Proceedings of the National Academy of Sciences, which examined why opposing groups, including Democrats and Republicans, found compromise so difficult. The researchers concluded that there was a widespread political “motive attribution asymmetry,” in which both sides attributed their own group’s aggressive behavior to love, but the opposite side’s to hatred. Today, millions of Americans believe that their side is basically benevolent while the other side is evil and out to get them.

Members of one group were prompted to write a short essay about a time when they felt bored; the other to write about “a time when your life seemed unfair. Perhaps you felt wronged or slighted by someone.” After writing the essay, the participants were interviewed and asked if they wanted to help the scholars in a simple, easy task.

The results were stark. Those who wrote the essays about being wronged were 26 percent less likely to help the researchers, and were rated by the researchers as feeling 13 percent more entitled.

My advice to Prof. Yancy is that he descend from his ivory (ebony?) tower, look around him, and do some introspection of his own. Can he open his mind long enough to recognize the damage that Black Lives Matter is doing with its profane antics and petulant lists of demands?

The nation isn’t perfect. It wasn’t when Barack Obama gave his pseudo-inspirational speech in 2004 proclaiming there is “no white America and no black America.”

The racial divide has never been greater than it is now. The solution to bridging this yawning chasm is not 2,000-word hissy fits fixing blame and parading as quasi-therapeutic outreach. It isn’t finding “a space for loving a Trayvon Martin, Eric Garner, Tamir Rice, Aiyana Jones, Sandra Bland, Laquan McDonald and others,” as Yancy smarmily advises.

Yancy is right in one regard. That is in his call for responsibility, although I would argue that need cuts both ways.

Tweet of the Day: Sanders feels the ‘burn’ after demonstrating his economic ignorance
Next Post
A Navy SEAL and a combat dog: More of the cost of Bowe Bergdahl’s decision