Now is a good time to reflect on what matters and how we should live our lives.  And something I have been contemplating in recent months is how important it is to put the role of government in our lives in proper perspective.

The spate of lawsuits demanding that crosses and other Christian symbols be removed from public property in veterans’ memorials kick-started this process for me.

It’s time – and I’m no longer saying “maybe” about this – to give up on “government” as the owner of the public square.

We’ve had a century-long experiment with the concept, which entered America through the philosophy of Progressivism, under which everything in human life is managed by government “experts.”  Americans can hardly remember this now, but before Progressives began to make inroads in our politics, the American people thought of private property as being the basic state of property-holding and management in human life, and government management as being a subordinate and contingent phenomenon.

That’s why virtually all of the land east of the Mississippi was privatized before 1900.  Communities existed because people went in and created them – through the practical mechanism of owning property.

“Government,” in particular the federal government, was not thought of as an arbiter of human connections.  It may have been nice to have a public official commemorate a religious holiday, but having your holiday or your traditions honored by “the government” wasn’t something that mattered to the American idea of freedom or justice.

Government wasn’t the nexus of all human interaction.  It wasn’t the central brain of a Borg collective.

And it’s time to get back to that state of affairs.

A great piece at the Blaze brought this point back front and center for me today.  In the town of Wadena, Minnesota, officials voted to stop displaying a long-cherished nativity scene on city property after they were threatened with a lawsuit by the Freedom from Religion Foundation.

But, as the Blaze author (Carly Hoilman) suggests, the aftermath is what we should take courage from.  The town’s nativity scene didn’t get put up where it used to be.  Instead, nativity scenes popped up all over the town of 1,858 people.

As for the nativity scene debacle, Anderson discovered that there were a few things the FFRF might have overlooked.

After leaving the diner, Anderson took a stroll down the whole two blocks that comprise downtown Wadena. To her delight, she saw Nativity scenes in “nearly every shop window.”

And there’s more. According to Anderson, Wadena is a regular Christmas wonderland.

The town square has a gazebo where, “every single day,” a different family rents the space and erects a different nativity scene.

The diner where she had eaten lunch was streaming Christmas music from two speakers atop its roof, and “every person that passed by” wished her a “Merry Christmas.”

This is not a loss for the community, people.  It’s a loss for the entity “government.”  It turns out that it’s people, shop-owners, and families who actually own the public square.

Walk away from government as the planner, host, or arbiter of community-spirit event-making.  Stop worshiping it as a great bronze idol.  Don’t fear to leave government-sponsored commemorative events pathetic and useless, with only two out of ten people still willing to attend them.  Don’t sit still for government retaining control of all the land, so that it can only be put to the uses preferred by the government bureaucrats appointed by people who live and breathe the gospel of “government.”

Government is too easy to take over and pervert for evil ends.  It’s armed; it is never a benign, harmless entity in our lives.  Nor should it be, if we want law enforcement and national defense to be effective.

And if we want to commemorate our vets, celebrate holidays, even educate our children, we should think in terms of requiring the “government” square to remain subordinate or silent.  Government is properly a tool of limited utility, fit only for storage in the back room anyway.  We should put the tasks of heart and soul where they belong: with the people, in our private capacity.

Not everyone wants to participate in other people’s rituals and commemorations?  That’s what tolerance and freedom are for.  True community arises individual to individual, family to family.  It isn’t something that exists because we have a government.  Government is just paid overhead.

Alexis de Tocqueville, in his 1832 treatise Democracy in America, observed that Americans’ great strength lay in their fearlessness and enterprise in coming together for mighty projects without government involvement.  It’s time for Americans to resurrect that excellent practice.

Walking away from government doesn’t mean leaving it to the progressive left, to make as big and oppressive as they want.  It means taking the wrecking ball to big government.  The government space will have to shrink: become far, far smaller and emptier, and have far fewer opinions. 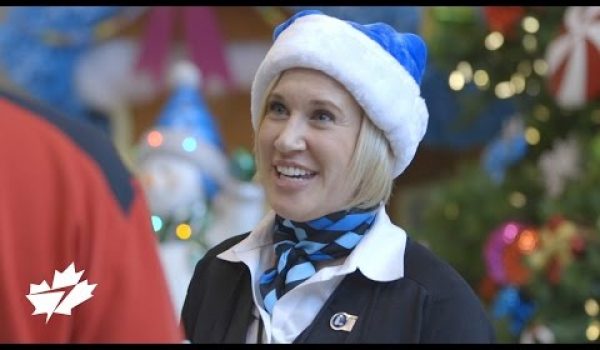 The spirit of Christmas is epitomized in WestJet’s 12,000 mini-miracles
Next Post
Prof at Christian collge celebrates Christmas by showing solidarity with Muslims