“Hillary is a liar.”

This was Liberty University (LU) President Jerry Falwell Jr.’s response to Sean Hannity when asked about Hillary Clinton’s disgusting, and completely out-of-context, charge that he committed treason by encouraging LU students to defend themselves should Muslim terrorists, like the “San Bernardino Two,” ever attack Liberty University. Clinton, a woman intimately familiar with the elements of treason, made her defamatory accusation on ABC’s “This Week with George Stephanopoulos.”

“I always thought that if more good people had concealed-carry permits, then we could end those Muslims before they walk in and kill,” Falwell said to wild applause, referring specifically to Islamic terrorists who might attempt mass murder on campus. “So I just want to take this opportunity to encourage all of you to get your permit. We offer a free course. And let’s teach them a lesson if they ever show up here,” he added.

Falwell made these remarks right after publicly offering full-ride scholarships to the children of heroic first responder Lt. Mike Madden, as well as to the kids of all victims in the San Bernardino attack.

Right on cue the left-wing gun-grabbers, Stockholm Syndrome-suffering Islamist sympathizers and well-meaning, though woefully misguided, “nicer-than-Jesus” Christians lost their collective noodle. Chief among them, and dog-paddling neck-deep in crocodile tears, was Hillary Clinton: “This is the kind of deplorable, not only hateful response to a legitimate security issue, but it is giving aid and comfort to ISIS and other radical jihadists,” barked the Benghazi Moonbat.

In truth, President Falwell’s comments are 100 percent accurate from both a moral and a legal standpoint. The uninfringeable constitutional right to arm and defend yourself, your family, friends, colleagues and even perfect strangers is not just as “American as apple pie”; it’s as biblical as a shepherd boy’s slingshot.

In response to the explosive global threat of Islamic terrorism, Wayne Lapierre, president of the National Rifle Association (NRA), recently observed, “When evil knocks on our doors, Americans have a power no other people on the planet share: the full-throated right to defend our families and ourselves with our Second Amendment.”

But it’s not just a Second Amendment right.

Or so says Jesus.

He told His disciples, for instance, “When a strong man, fully armed, guards his own house, his possessions are safe” (Luke 11:21).

Additionally, as he was preparing to selflessly surrender Himself for imminent crucifixion, He likewise encouraged His followers to arm themselves for imminent self-defense, saying, “But now if you have a purse, take it, and also a bag; and if you don’t have a sword, sell your cloak and buy one” (Luke 22:36).

And the modern equivalent of the sword is the gun.

Those who exploit these and other scriptures to suggest that Christ forbade self-defense, up to and including the use of justifiable deadly force, are taking these passages out of context. Christ’s “turn the other cheek” comment referred specifically to forgoing revenge and to being persecuted for His name’s sake by those who hate Christianity. It does not suggest that we parents must passively hand over our children to demonic Islamists so they can rape and behead them in our presence.

On the contrary, 1 Timothy 5:8 admonishes, “But if anyone does not provide for his relatives, and especially for members of his household, he has denied the faith and is worse than an unbeliever.”

Psalm 82:4 adds, “Rescue the weak and the needy; deliver them from the hand of the wicked.”

Moreover, Christ’s “Live by the sword, die by the sword” reproach of Peter, when taken in context, clearly refers, explicitly, to instances, or a lifestyle, wherein one affirmatively acts from an offensive rather than a defensive posture. When God says that vengeance is His, he means that we “shall not murder” or otherwise take revenge for some perceived wrong. Vengeance falls within God’s purview alone.

So, again, it’s biblically unfounded to suggest that, when the shooting starts, and if there is no escape, Christians must line up like sheep to the slaughter.

Christ already did that for us.

No, the Bible is clear. Christians may – indeed we should – arm and defend ourselves against evildoers. “Like a muddied spring or a polluted fountain is a righteous man who gives way before the wicked” (Proverbs 25:26).

Is applying deadly force in defense of self and others a last resort? Of course. As the Apostle Paul cautioned, “If possible, so far as it depends on you, live peaceably with all” (Romans 12:18). To be sure, we are to love our Islamist enemies. In fact, it is our greatest hope and prayer that they may come to the saving knowledge, acceptance and grace of Christ Jesus, who, alone, is “the Way, the Truth and the Life.”

Still, and in the meantime, Jesus did say, “Blessed are the peacemakers.”

So I’ll be keeping my Peacemaker within reach.

Obesity boom: Watch America’s obesity transformation in one 17-second graphic
Next Post
Takes one to know one? Trump calls Cruz ‘a bit of a maniac’ 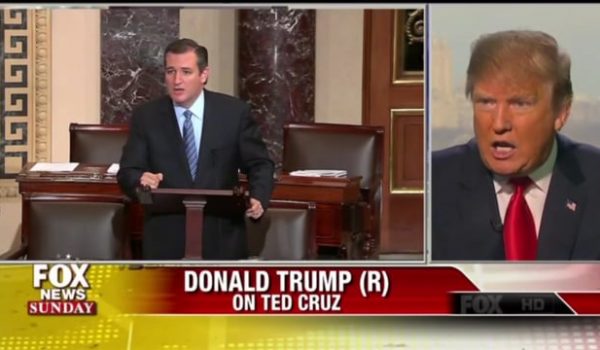