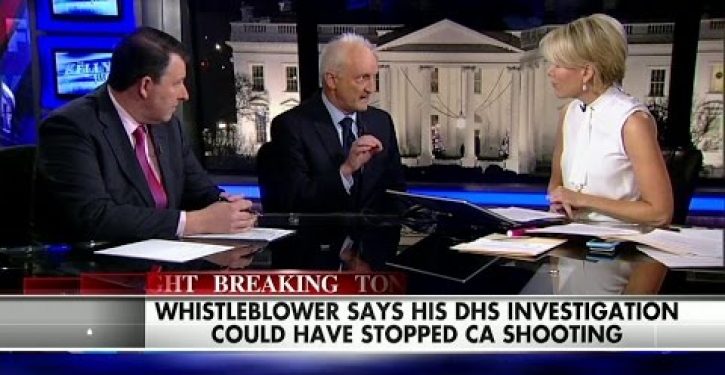 Political correctness kills.  That’s the lesson that keeps coming to the fore from the San Bernardino terror massacre on 2 December.

Philip Haney, a former senior analyst at the Department of Homeland Security, has now come forward to say that in 2012, he was running an effort at the National Targeting Center that would “very plausibly” have flagged Syed Farook – and probably, by association, his bride Tashfeen Malik – because of Farook’s connection with a mosque in San Bernardino, California.  (H/t: Daily Caller)

But after six months (in 2012), decision-makers in DHS and the State Department shut the effort down.

DHS didn’t just leave the effort in place but tell Haney to change his focus.  The program itself was shut down, its funding cut and the records Haney had developed destroyed.

What was the program?  Haney was tracking Salafi (Sunni fundamentalist) Islamists of the Deobandi movement, which is prominent in Pakistan along with other parts of South Asia, and with which Farook and Malik both had extensive links.

One of those links was Farook’s connection with Dar-al-Uloom al-Islamiyah mosque in San Bernardino, the one he attended most recently prior to the terror attack.  The mosque is part of a Dar-al-Uloom network affiliated with the Deobandi movement.  (Dar-al-Uloom means “house of knowledge,” and has the same significance as “madrassa” in referring to a center of Islamic education.)

Haney was tracking activity at that mosque before he was shut down in 2012.

The specific Deobandi group Tablighi Jamaat, with which Farook and Malik were both connected, has a long history in Pakistan – and extensive links to terror attacks in the last decade and a half, both at home and abroad (see the Daily Caller link, above), as well as a record of threatening and toppling Western-friendly governments in Pakistan.

But Tablighi Jamaat has benefited from flying under the radar – from the perspective of U.S. security agencies in particular, which have tended to treat it as a fundamentalist but not terrorist group.

A seminal article in the Middle East Quarterly in 2005 warned that this complacency was dangerous.  Author Alex Alexiev pointed out that it was Tablighi Jamaat’s success at secrecy that made it difficult to track.  The group itself doesn’t plan terror attacks; its “missionaries,” or proselytizers, recruit members for groups that Tablighi Jamaat sponsors, which then go on to commit terror attacks, or at least be detected plotting them.

Alexiev recounts prior links between Tablighi Jamaat and well-known plotters foiled in the United States:

Within the United States, the cases of American Taliban John Lindh, the “Lackawanna Six,” and the Oregon cell that conspired to bomb a synagogue and sought to link up with Al-Qaeda, all involve Tablighi missionaries. Other indicted terrorists, such as “shoe bomber” Richard Reid, “dirty bomber” Jose Padilla, and Lyman Harris, who sought to bomb the Brooklyn Bridge, were all members of Tablighi Jamaat at one time or another. According to Robert Blitzer, head of the FBI’s first Islamic counterterrorism unit, between 1,000 and 2,000 Americans left to join the jihad in the 1990s alone. Pakistani intelligence sources report that 400 American Tablighi recruits received training in Pakistani or Afghan terrorist camps since 1989.

This is the group Haney was tracking when he was directed to stop.

According to Haney, his work was shut down literally because the Obama administration deemed it to be prejudicial to Muslims’ civil rights.  In an interview with Megyn Kelly on 10 December, he and Kelly had this exchange (video below):

Kelly: And so, under your program, you would have identified the mosque and done what?

Haney:  I can tell you I would have identified it because individuals who were already in the case [i.e., of Tablighi Jamaat and its associated mosque networks] in 2012 went to that mosque.  Therefore, as we were tracking them, we would have put the red light on them.

Kelly:  And you say they shut you down because they felt this was essentially profiling of Muslims.

Haney: They specifically said that, because we FOIA’ed the case, and we got the internal memos, and it says that we are not allowed to develop a case based on Tablighi Jamaat specifically, and/or any Islamic group.

There really is no nuanced spin that can be put on something like this.  No valid argument can be made that a Pakistani Islamist group whose members have so frequently been implicated in terror plots and attacks (again, see the Daily Caller list of overseas attacks) should be left untracked in the interest of “civil rights.”

Haney himself, meanwhile, wasn’t just shut down.  When he tried to fight for his program to track Deobandis (whose ranks, not coincidentally, include prominent figures in the Islamic State hierarchy), he was hounded out of DHS.  According to The Federalist:

[Haney] met with the DHS Inspector General in 2013, in coordination with several Members of Congress. DHS and the Justice Department then subjected him to investigations, none of which showed wrongdoing, he said. In September 2014, they sequestered him, revoked his access to the database and revoked his security clearance.

Unfortunately, the level of Haney’s concern about the fundamentalists he was tracking comports perfectly with the level of threat they have posed in the past 15 years.  His scenario, in which tracking Tablighi Jamaat would have flagged Farook and Malik, is indeed very plausible.

But the Obama administration specifically and explicitly shut that tracking program down in 2012, and destroyed the records associated with it.

Connecticut: Governor to ban gun purchases for anyone on terror watch list
Next Post
ACLU board member suggests shooting Trump supporters – because Trump is a ‘hate-speech felon’ *UPDATE*