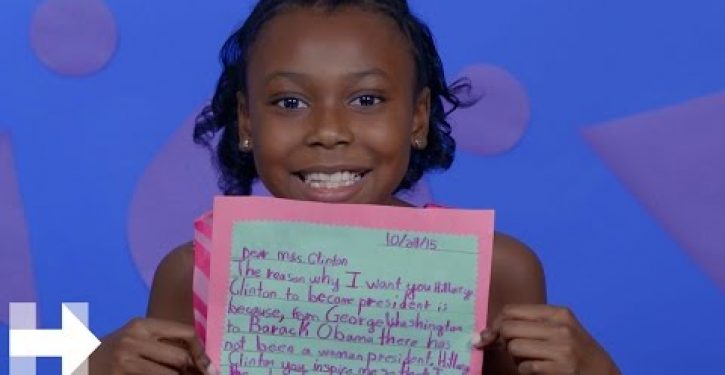 I am sick and tired of waiting. It is high time the nation had a ____ president.

The blank in the above sentence may be filled with the label of your choice, provided there has not yet been a president belonging to the designated class. (That includes “black,” since Barack Obama is half-white, though he has gone to great pains to play down that aspect of his genetic makeup.)

Hillary Clinton would argue that the blank should be filled with female or woman (though I have a strong suspicion that she would not be that bullish about a Carly Fiorina presidency). Why? Well, there’s the sheer numbers argument. Women comprise roughly half the U.S. population, and one has never served as commander in chief.

But her newest — and to date most exploitive ad — features a bunch of young girls who have supposedly written letters of support to Clinton arguing that “44 boys is too many.”

In the spot, which runs 1 minute 19 seconds, a patchwork of correspondents delivers a single message that there’s never been a female president but should be because…

But that is where the cute-as-hell video breaks down. At one point, text on the screen reads “Girls are smarter than boys.” Even if that were true, and it’s certainly open to debate, what of it? Where is the evidence that Hillary Clinton personally is brighter than any of the other current contenders for the White House? It can’t be divined from her policy statements, which included a rejection yesterday of the announced administration plan to send special ops into Syria and Iraq to combat ISIS. One would be curious to know how she would “fight for world peace,” which the rotating narrator of her campaign ad addresses at 0:34.