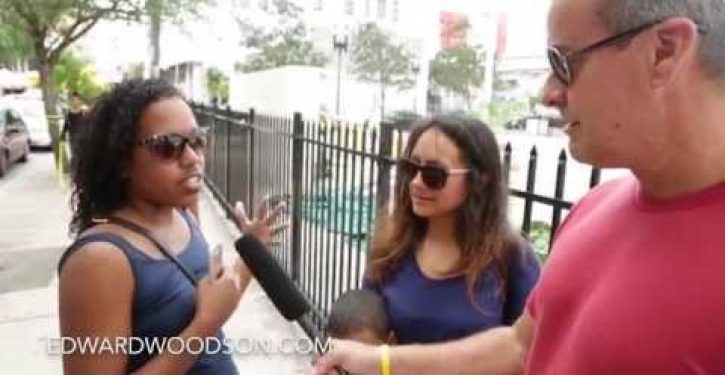 As J.E. Dyer notes, Barack Obama is once again asking Americans to initiate a discussion (get into an argument?) around the Thanksgiving table this year about a topic near and dear to him: gun control. Obviously, he hopes in earnest that the celebrants will reach a mutual desire for “common sense” gun legislation.

Obama is not the only liberal attempting to exploit a joyous holiday to advance a political agenda. The geniuses over at the Huffington Post want us to reflect on the fact that, like the current Syrian migrants, the pilgrims were “refugees too” — which is an interesting if cynical departure from the usual view of the pilgrims as heartless marauders who came here and seized the Indians’ land, then systematically decimated their populations by deliberately infecting them with smallpox.

I took my cameras out onto the streets of Miami to find out what the average Joe and Josephine knew about the day set aside via presidential proclamation for giving thanks. The answers from most of my correspondents probably won’t surprise you, though if you’re opposed to profanity for profanity’s sake, be forewarned.

On a saner note, a Happy Thanksgiving to all.

Time for another edition of ‘People who knit sweaters for birds’
Next Post
Tweet of the Day: Cher on Trump’s ‘finate’ wisdom