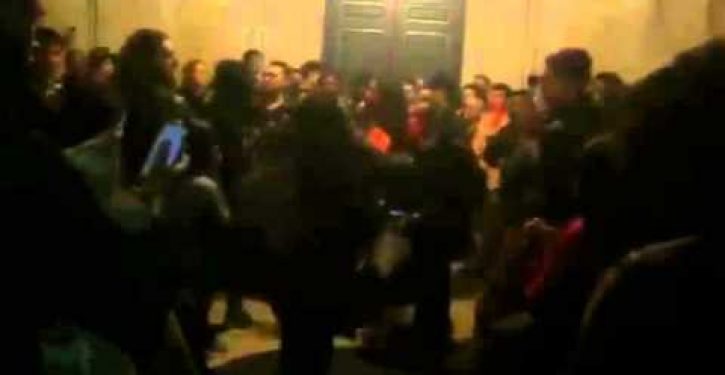 Demonstrators calling themselves the Black Justice League (BJL) began an occupation of Nassau Hall Wednesday morning, demanding President Christopher Eisgruber sign on to a list of three major demands. Their first and most notable is that the school acknowledge the “racist legacy” of famed alumnus Wilson by renaming the Woodrow Wilson School of Public and International Affairs, renaming the Wilson residential hall, and removing a mural of Wilson that decorates Wilcox dining hall. Their other two demands also had a racial nature, calling for mandatory “cultural competency training” of all faculty and staff and a new distribution requirements covering the history of “marginalized peoples.”

Eisgruber said from the beginning that he was sympathetic to demands two and three, but held firm at first on Wilson, saying a name change was not on the table and Princeton had to accept his bad aspects along with his good ones.

In response, about 20 students refused to leave his office, staying overnight.

It took less than 36 hours for Eisgruber to capitulate. Late Thursday, a deal was negotiated under which the students agreed to leave Nassau Hall, and in return Eisgruber and other top administrators agreed to at least consider all of their demands, though with some stipulations indicating not all of them may be granted in their entirety.

Notably, Eisgruber agreed to seek the removal of Wilson’s mural at Wilcox, said he will seek to have a plaque put up acknowledging Wilson’s racial view, and said he will assemble a committee to investigate a potential name change for the Wilson School.

Eisgruber said he will do his best to implement their other demands as well, though he said this may not always be possible. For example, mandatory cultural competency training will require faculty approval, and such training has previously been rejected on the grounds it could curtail free speech.

“That’s like asking [the faculty] to tax themselves,” Eisgruber said, according to The Tab.

Taking advantage of Eisgruber’s willingness to negotiate, BJL added several new demands before agreeing to leave. Most notably, they demanded the university create a new affinity housing option for black students, so that those interested in black culture could live segregated away from the rest of campus. Princeton dean Jill Dolan said the college will strongly consider granting this request, though meeting it will take some time. It will be a substantial shake-up of Princeton’s existing housing structure, which relies mostly on residential colleges that mix up students of all backgrounds.

Eisgruber also agreed the protesters will face no punishment whatsoever for trespassing on his office for two days.

A video uploaded by The Tab shows the protesters celebrating their win, promising this episode was “only the beginning” of their effort at Princeton.