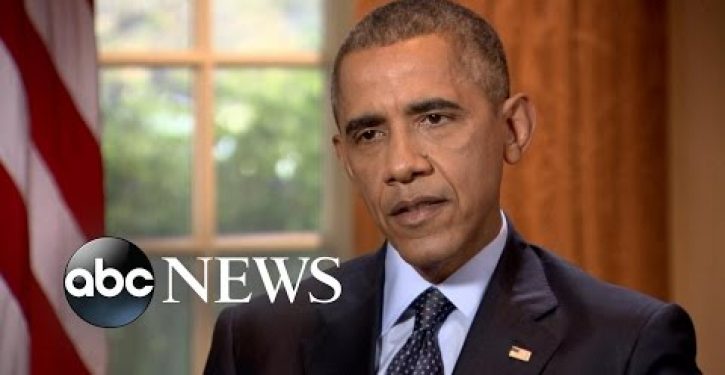 In an interview with George Stephanopolous on “Good Morning America,” Obama asserted that ISIS was not gaining strength and that “we have contained them.”

When Stephanopolous suggested ISIS was gaining strength, Obama pushed back.

“I don’t think they’re gaining strength,” he said. “From the start, our goal has been first to contain and we have contained them. They have not gained ground in Iraq, and in Syria they’ll come in, they’ll leave. But you don’t see this systemic march by ISIL across the terrain.”

Kurdish forces retook Sinjar Friday morning with the help of U.S. airstrikes, liberating the Iraqi city from more than 15 months of Islamic State rule and cutting off one of the group’s major supply lines. And a U.S. airstrike Thursday targeted and may have killed the ISIS executioner known as “Jihadi John.”

Obama also touted that the U.S. and its allies had “made some progress” in reducing the flow of foreign fighters to ISIS.

“We’ve made some progress in trying to reduce the flow of foreign fighters, and part of our goal has to be to recruit more effective Sunni partners in Iraq to really go on offense rather than simply engage in defense.”

If the Paris attacks are genuinely the work of ISIS-aligned militants, it may be the second major ISIS-related attack in the past few weeks to come outside of the Syria and Iraq region. The group has also taken credit for the destruction of Russia’s Metrojet Flight 9268, which crashed in the Sinai two weeks ago, killing 224.