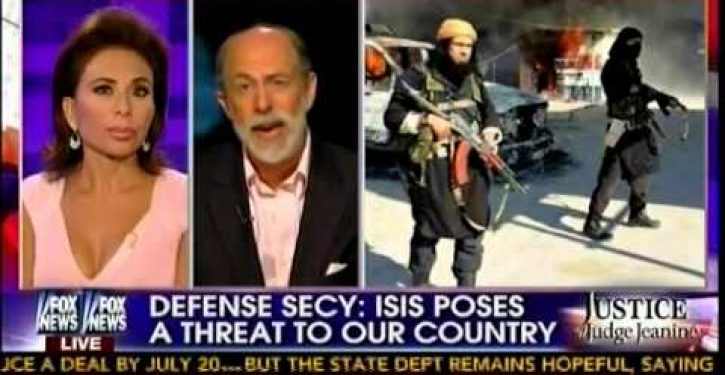 The influx of undocumented aliens illegally crossing the U.S. southern border is opening the door to something far more insidious than health concerns or Central American gang members — its giving access to terrorist organizations, including ISIS and al-Qaida, according to a security expert..

Frank Gaffney, president of The Center for Security Policy, appeared on “Justice with Judge Jeanine” Saturday to discuss the problem.

“I think there’s no question that what we’re seeing is growing evidence that enemies of this country who have a shared goal — namely the imposition of sharia … they are in fact, exploiting the porousness of our borders,” he told host Jeanine Pirro.

The “they” he referred to included the Islamic State (ISIS), al Qaeda, Hamas, Hezbollah and the Taliban. Gaffney acknowledged that some Islamic terror “sleeper cells have been identified, and more are most certainly on their way.”

With ISIS’s recent acquisition of weapons of mass destruction — including chemical and nuclear material suitable for a dirty bomb — he added that the problem is “metastasizing.”

“There is a threat to the public safety of the American people as well as the national security,” he added. “And I’m really appalled that the Obama administration is actually exacerbating this problem rather than protecting us against them.”

“I think the administration sought to bring more illegal aliens into this country.” @frankgaffney