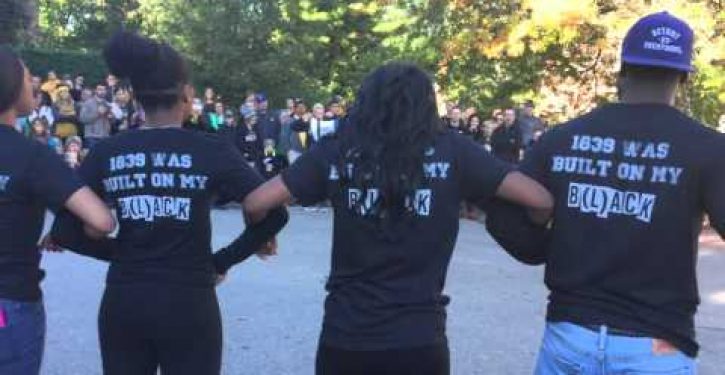 Courtesy of The Federalist, America now has the opportunity to solemnly inspect the “poop swastika” reported at the University of Missouri on 24 October, along with other traces of fecal matter found in its vicinity in a unisex restroom on the third floor of Gateway Hall, a dormitory building.

I admit, as an aside, that thirty years ago, I never seriously imagined Americans would use their freedom from the clutches of the Cold War to create this particular brave new world.  University presidents being railroaded out of office with charges of “racism,” over bathroom doodles executed in poop – by unidentified parties who may actually have been black (see below) – were not what I had in mind.

Time to revisit that defeat of communism, perhaps?  Cultural Marxism, at least, seems to be winning its war: the long march of destruction through Western institutions.

Sean Davis recounts the tale of the poopstika at the link.  One of the things clarified in his reporting is that university officials responded immediately, and pretty comprehensively.

Here are a couple of other informative highlights (emphasis added):

The e-mails [released to The Federalist] also detail a disturbing and previously unpublicized racial incident that happened on the same floor of the same dormitory that occurred the previous week. According to a dorm hall coordinator, a white dorm resident was the subject of racial slurs.

“We did have another incident that was just reported last week where an intoxicated individual said ‘bitch ass nigga’ to a white resident, when having a heated interaction with multiple black residents in the third floor lounge, which is the same floor this bathroom incident happened on,” Gateway Hall hall coordinator Susan Cohn wrote to multiple university officials on the morning of October 24. “The individual that reported said he was offended by this but felt like it was not directed towards him or the other black residents in the lounge.”

“[The University of Missouri Police Department] followed up with this resident Friday afternoon,” Cohn noted.

The university’s Title IX investigator, Salama Gallimore, tied that individual to anti-Semitic slurs used toward members of a Jewish fraternity.

Salama Gallimore, the lead investigator in the university’s Title IX office, responded to Cohn’s e-mail and suggested that the student involved in that particular incident may well have been responsible for the poop swastika in the bathroom.

“The accused student in the above incident has also been reported to have made anti-semitic remarks to the members of a Jewish fraternity,” Gallimore wrote.

“It is possible that the aforementioned student may be responsible for the swastika vandalism as he is a resident of Gateway. Since the student has allegedly engaged in acts of racism and anti-semitism, I feel that it is important to consider that the swastika drawn in fecal matter (even if it was not drawn by the student under investigation) was meant to offend and threaten a larger population of our campus community in addition to Jewish students.”

Some things we don’t know for sure include how strongly the authorities suspect that the poop-tagger and the racial-slur-monger are one and the same person – and what that person’s race is.  So let’s not jump to conclusions.

But we can note that the new disclosures about the poopstika incident, and the other incidents tied to an individual from the same floor of the same dorm, shed a different light on the events that were used to justify demands for President Tim Wolfe to step down.

We can also speculate intelligently that if the individual accused of the racial slurs were white, there would be little if any effort to conceal that fact.  Indeed, if the individual who lobbed the slurs fit the sinister profile of a white supremacist radical, we can bet he would already have been suspended – if not expelled.  (We can also doubt that he would draw a swastika in feces, on a wall or anywhere else.)

Meanwhile, shedding a different light on the allegations of “racism” against Mizzou will apparently be a growth industry.  Breitbart’s Lee Stranahan took a look at video (below) of the incident in which activist and hunger-striker Jonathan Butler claimed to have been bumped by a car carrying Tim Wolfe. (H/t tip to reader/commenter Guest at the earlier post.)

The event was a special turnout of black activist protesters for the Mizzou Homecoming parade in October.  It turns out that Butler rushed toward the car, a red convertible carrying Wolfe in the parade, which the protesters were attempting to block.  The car’s driver tried to turn and avoid the protesters.

Looking at the video Butler himself links to, however, makes it clear that the car was backing away from protesters in an attempt to get around, but the group keeps advancing until suddenly Butler rushes towards the car.

If you start watching at 3:50 in the video embedded here (the “video Butler himself links to”), you’ll see that the protesters in fact crowded the car and deliberately made contact with it, and that the driver was either keeping the car perfectly still, or trying to maneuver it very slowly away from the protesters, at every point thereafter.  (But watch the whole video if you like.  At no point does the car bump anyone.)

At least America has a new word to play with now.  “Poopstika” may have some staying power.