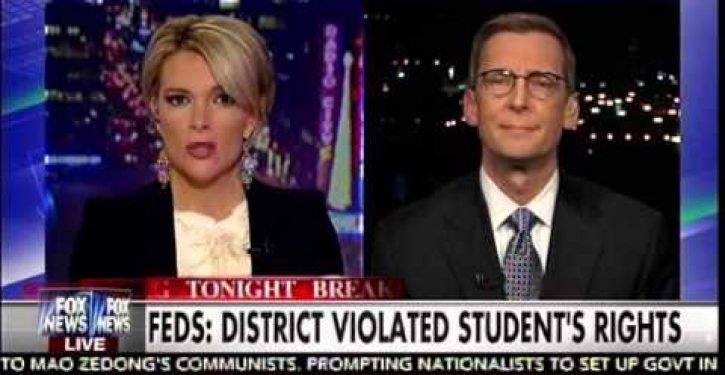 When it rains it pours. This morning Howard Portnoy wrote about a landmark referendum vote in Houston to repeal that city’s LGBT-friendly Houston Equal Rights Ordinance, or HERO.

Now comes word that the U.S. Department of Education’s Office for Civil Rights has ordered a taxpayer-funded school district in Palatine, Ill., to allow a male transgender student who dresses like a girl and otherwise identifies as female to use the girls locker room and shower on school premises.

The Department of Education has given the school district one month to let the student use the girls locker room. If the district does not capitulate, it risks losing federal funding.

President Barack Obama’s Department of Education — which manifestly is not vested with judicial powers — has taken to applying Title IX, a comprehensive 1972 federal law that prohibits discrimination on the basis of sex, to transgender cases.

Megyn Kelly of Fox News Channel did an illuminating segment on this ruling, a video clip of which follows:

The school attempted to accommodate the student, setting up a separate dressing area for him that would allow girls the privacy they deserve, but the teen, backed by the ACLU, refused to accept “halfway measures.”

The Chicago Tribune.quotes John Knight, director of the LGBT and AIDS Project at ACLU of Illinois, as saying, “Showering in a different place is ‘blatant discrimination,’” adding:

It’s one thing to say to all the girls, ‘You can choose if you want some extra privacy,’ but it’s another thing to say, ‘You, and you alone, must use them.’ That sends a pretty strong signal to her that she’s not accepted and the district does not see her as girl.

On Monday, the Education Department’s Office for Civil Rights said it agreed with Knight’s assessment, writing in a letter:

Student A has not only received an unequal opportunity to benefit from the District’s educational program, but has also experienced an ongoing sense of isolation and ostracism throughout her high school enrollment at the school.

I can imagine that people who find this decision intrusive and appalling will raise hypothetical questions like “Would Obama be OK with his daughters showering next to biologically male teens?” Something tells me his answer would be yes. That doesn’t mean, of course, he should have the final say on whether it’s OK for other parents or their daughters.