Back in the day, people who were squeamish about mothers breastfeeding in public were denounced as prudish. When a new generation of women came along and demanded “topless equality”  — the right to walk around bare-breasted in public — the prudish label was dropped in favor of sexist.

It’s anyone guess what slur will be devised for those who look askance at the latest frontier for women: public bottomlessess.

Female students at Scripps College in Claremont, Calif., have a mounted a campaign to fight the “taboo” on openly showing women’s genitals. They have dubbed their crusade “Project Vulva.”

As their Facebook page reveals, these gals appear to be laboring under the misconception that the public display of male genitalia is a widely accepted practice:

Why is it that, generally, society is so comfortable with the image of the penis … [while] vulvas are considered taboo?. [sic] In middle school people would scribble penis pictures on the desks in the classroom. There is always that kid who passes out at the party and someone draws a dick on his face. So where the vulvas at??? [sic] What even IS a vulva (often confused with the vagina)? What problems can lack of knowledge lead to?

Not surprisingly, the movement to free the vulva has encountered opposition … but not from prudes. Rather, the women have found themselves under attack for allegedly engaging in “transmisogyny.”

On Oct. 29, “Project Vulva” staged an event at a coffeehouse near the all-women’s college and invited participants to come and decorate cupcakes in a manner so as to resemble vulvas. But the premise rapidly drew criticism from transgender activists, who complained that it demeaned the experience of women who were born in men’s bodies.

Aliá’s post provoked an extended debate over just how offensive the event was.

“The wording of this event excludes trans women, and further normalizes transmisogyny and violence against trans women,” added Simone Rae Charles-Isosceles, who dismissed the whole affair as a “garbage, cis, white event.”

The backlash occurred even though organizers tried to cover their bases by saying they were not assuming a simple “binary concept of gender.”

“Not all women have vulvas, and not all vulvas belong to women,” the Facebook page said.

The outrage grew strong enough that an apology was issued by The Motley Coffeehouse, which hosted the event and describes itself as an “intersectional, political, and feminist business.” The coffeehouse said in a statement it was working hard to atone for its error and overcome its “herstory” (rather than “history”) of privilege:

The Motley wants to validate and support the critiques that have been voiced concerning Project Vulva. We are deeply sorry for the hurt experienced by the trans community both in the space of the Motley and on the Scripps campus in general. Being a privileged and exclusive space has long been imbedded in our herstory, and though we have tried and are trying to become an inclusive space where everyone can feel safe and accepted, we recognize that we have failed.

To rectify the situation, Motley announced that the event would feature “a space … devoted to interrogating the symbol of the vulva – what does it mean to you? Is it a symbol of strength? A reminder of being labeled as an ‘other’ that is oppressive?”

We hope that providing the opportunity for written reflections about the vulva (which will be kept in our sitting room after the event) will help foster further dialogue and widen our perceptions of feminism to be more intersectional and inclusive.

At least one person said the apology wasn’t enough though.

“I’m surprised that with the feedback this event has received, it hasn’t been canceled,” said commenter Jay Marks. “Whether or not cisgender people view this as an act of violence towards trans women is irrelevant. Multiple trans women have expressed that this event is an act of violence towards them, and it’s extremely concerning to me that while they are being acknowledged, they are not being listened to.”

Nevertheless, the event went forward, and afterwards, organizer Jess Bird uploaded a video on YouTube showcasing her efforts to raise awareness about the vulva: 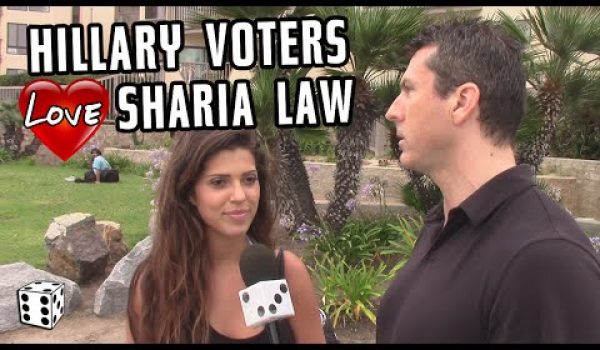 Where do Hillary supporters stand on sharia law in U.S.? Watch and learn
Next Post
Could opposition to gay marriage cost you your right to keep guns?