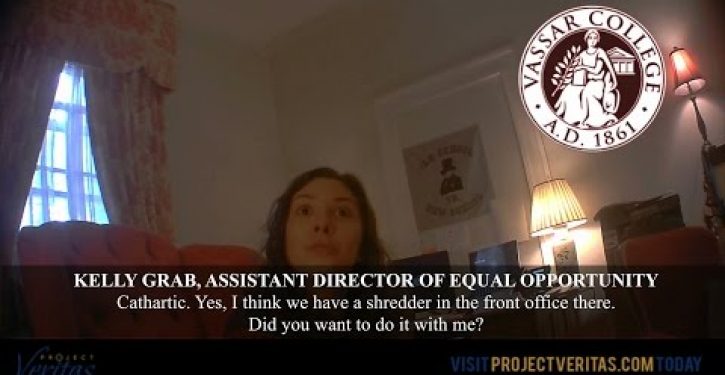 And no, it’s not “put your big girl panties on and deal with it.”

On a day when we discover that some of Hillary’s supporters are all for instituting sharia law in “the minority communities in America,” it’s probably not a real big surprise that college administrators can be baited, by a Project Veritas undercover reporter, into literally shredding copies of the U.S. Constitution for therapy’s sake.  But it’s still informative.

It’s not like our culture totemizes the written word, of course.  We don’t think spooky things will happen if we shred the pages of a printed document.  We don’t feel like we’re shattering icons, if physical harm befalls a book — even if it’s a copy of the constitution that guides and anchors our nation.

But that’s not really the point about what the Project Veritas team provoked in the video below.  The real point is that college administrators listened respectfully to inane drivel about “triggering” from the girl with the hidden camera, and then joined in, trying to help her cope with her absurd terrors — up to and including the “cathartic” shredding of the Constitution that was such a source of distress for her.

The obligatory back story:

“Last week something kinda happened on campus that kind of really upset me and I ended up having a panic attack,” the reporter tells Vassar College Assistant Director of Equal Opportunity Kelly Grab. “It’s just I’ve been kind of hiding out in my room ever since kind of scared, so, finally somebody told me I should maybe come talk to you about it and see if there’s anything that can happen or anything … They were handing the Constitution out on campus.” …

“They were handing it out and as soon as I saw it you know I started to not be able to breathe, hyperventilating,” the reporter elaborated. “My vision went blurry and I just—kind of just lost control.”

After establishing that the reaction was triggered merely by the offering of copies of the Constitution and not by anything the group had said, Grab offers her sympathies to the reporter.

“And so what I think you’re sharing with me is that your interaction in receiving this was harming, right?” Grab confirms. “And that’s what we certainly want to avoid; we don’t want to limit people in exchanging ideas or having opposing viewpoints, but when it’s disruptive or causing harm…”

“Yeah, which I think the Constitution does,” the reporter interjects. “I mean, it’s not just me, it’s—I mean I thought that Vassar wanted to create like a safe place here, you know a place that … where students could walk around and not be scared of seeing discriminating things on campus.”

Eventually, the undercover reporter gets to the point:

“Cathartic … Yes, I think we have a shredder in the front office there,” Grab replies. “Did you want to do it with me?”

The video then show Grab and the reporter enter another office, where Grab proceeds to shred the entire Constitution, page by page.

“Thank you, that made me feel better,” the reporter says, to which Grab replies, “[g]ood.”

Watch the whole thing.  The reporter finds others — professors — who discuss the Constitution in about the terms we would expect.  I’m not shocked by their comments, for the most part.  (I do get a kick out of the woman who has to whisper everything.)

But the real gold here is the cheery resort to cathartic symbolism — the solemn act of shredding — in the face of the deranged premise that terror of the Constitution can legitimately make someone hyperventilate and hide in her room.

Allowing the hyperventilator to go forth again on her own recognizance, instead of being put in a straitjacket, is icing on the cake.  You’d almost rather have a team of those garishly lit psychiatrists from 1940s movies, giving each other significant glances and visibly thinking “lobotomy” about Susan Hayward, than watch this “triggering” lunacy be followed by casual, over-the-counter therapy from the assistant director of equal opportunity.

Two additional thoughts.  One, this sort of institutionalized dementia can only be snug in the nest of unchallenged, irrational leftism.  We all know what would have happened if the Veritas reporter had come in, rambling and incoherent, after being “triggered” by a copy of the Seneca Falls Declaration.  The sympathy and understanding would have been in short supply.  The reporter herself might have been shredded, in that case, or at least escorted out and promptly investigated.

The other thought is about what modern academia has done with the noble idea of educating women.  It’s basically the same thing it’s done with the idea of educating men, but educating women has its own special measuring stick.  What would Abigail Adams think of this mass hysteria, passing itself off as baccalaureate education?  I know what Mary Wollstonecraft Shelley would think.  She’d slap them all upside the head, in no uncertain terms.