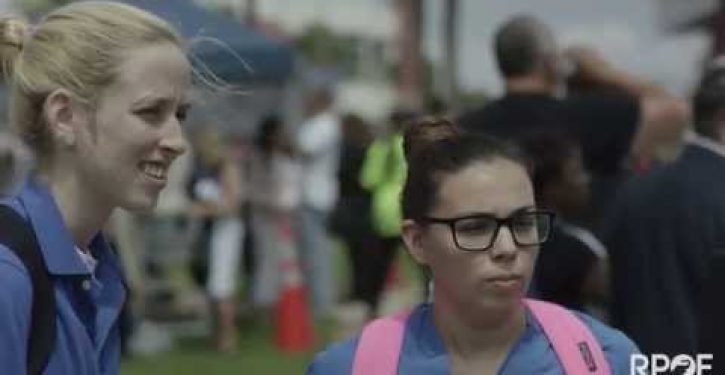 From Daniel Halper of the Weekly Standard:

The Florida Republican party has released video of Hillary Clinton supporters being unable to name an accomplishment of the former first lady, senator, and secretary of state. To make matters worse, the supporters the Florida GOP interviews are at a Clinton campaign event.

In the video, reposted below, most of the people simply draw a blank when asked to name Clinton’s top two accomplishments. One woman claims Clinton improved women’s rights in the Middle East. While Varieties of Democracy Institute, a liberal think tank, reports that strides have been made in that region of the world, most notably in Tunisia, Clinton’s name doesn’t come up once in their report.

Another man hems and haws, then finally blurts out that her chief accomplishment as secretary of state is that “she did not fight Obama.” The woman interviewed after him gives Clinton credit for being a lawyer, which she says is “super hard to achieve,” and also for “being the president’s wife.” No level of difficulty is posited for that achievement.

Interestingly, no one mentioned Clinton’s reset with Russia.

The chairman of the Florida GOP says in a statement, “While Hillary Clinton’s political record is abundant in flip-flops, personal conveniences, and political expediency, her resume clearly lacks a successful record of accomplishments, leadership, and transparency. Our nation deserves an effective leader that is ready to build a healthy, robust economy that creates opportunity and growth for all Americans.”