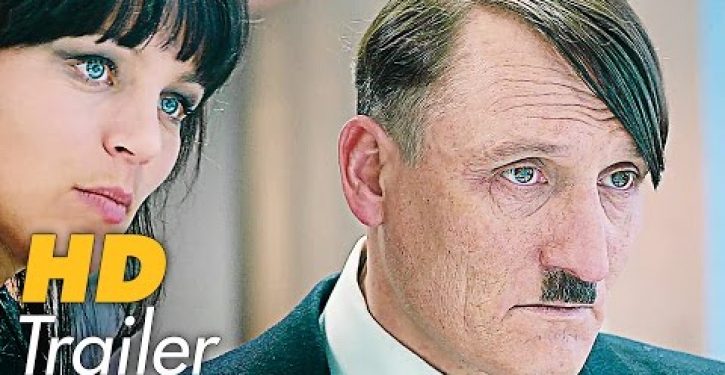 Think “Being There” meets “The Producers.” A new film that is toping the German box office is based on a satirical novel in which the main character awakens in present-day Berlin with no memory of any events after 1945. Mistaken for a famous comedian, he is given his own TV show.

The title of the film is “Er ist wieder da” (“Look Who’s Back”), and it’s based on the novel of the same name by Timur Vermes. The book, which sold 1.4 million copies in Germany, was translated into English by Jamie Bulloch and published in the U.S. in May. There is no word yet on whether the movie will make it here, but for now you watch the trailer for the film:

The question that will now inevitably be raised is the same one that was raised when the novel came out in 2013: Is it too soon? Put somewhat differently, will there ever be a time when people can look back on Hitler’s “zany antics” and laugh about them?

It needs to be noted here that this is not the first alternative-reality film to feature Hitler as a character or a reference point. The aforementioned “Producers,” by Jewish filmmaker Mel Brooks, used Nazism as a vehicle for bad taste, and more recently Quentin Tarantino‘s “Inglourious Basterds” featured a revenge fantasy scene in which Hitler is pumped full of Allied lead in a movie theater in Paris, his remains immolated for good measure.

Another Tarantino film, “Django Unchained,” features another revenge fantasy in which a former slave exacts a pound of flesh from slave owners and other miscreants. Despite the black man coming out on top, black commentators complained. Spike Lee said the film was “disrespectful to my ancestors” and Louis Farrakhan interpreted the movie as “preparation for race war.”

Oklahoma capitol: A better America visits the angry, bitter, intolerant new America
Next Post
How open-minded is Cornell U.? A reporter finds out