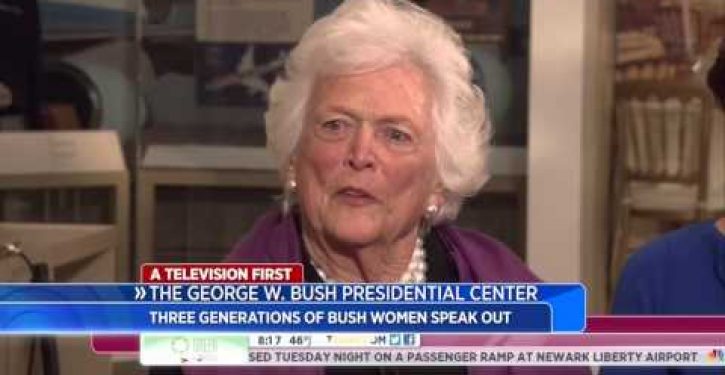 “There are other people out there that are very qualified and we’ve had enough Bushes.”

“He will get all our enemies and half of our friends.”

So said Barbara Bush in response to “Today Show” host Matt Lauer’s on Apr. 23, 2013 when asked if her son, Jeb, should run for president.

It has been two and a half years since the former first lady shocked the political world with her frank assessment of why Jeb Bush should not run for president in 2016.

Her initial blunt statements brilliantly predicted the reasons why Jeb! (last name withheld) is now dropping in the polls and running out of cash.

Moreover, if on March 15, 2016, Jeb does not win the Florida primary in his all-important home state, it is likely that he will be pressured to withdraw from the GOP nomination race. Currently polls show Jeb in third place behind Donald Trump and Sen. Marco Rubio (R-Fla.).

Poor Jeb, if only he had listened to his mother back in 2013. If so, he would have spared himself and his family the embarrassment of a bumbling campaign with its long slow fade and decreasing expectations that he will win the 2016 Republican presidential nomination.

None of this is surprising since from the beginning of Jeb’s presidential run only the most optimistic blinder-wearing Bush loyalists believed that Republican primary voters would welcome a third Bush presidency.

As a consequence of ignoring his mother’s advice against running, Jeb has wasted an inordinate amount of valuable media and campaign time defending his older brother’s presidential legacy. One is reminded of that old campaign adage, “When you are explaining you are losing.” And losing is exactly what Jeb is doing in the latest round of Republican polls where only 7% of primary voters now support his candidacy,

But there is a positive consequence of “enough Bushes” and that is the existing network of loyal, wealthy Bush family supporters who apparently are “ready for more Bushes” as witnessed by their initial generosity. So right out of the starting gate, Jeb’s super PAC Right to Rise USA was bolstered with $103 million in addition to $11.4 million raised by his own campaign.

Since Jeb was the first GOP candidate to raise over $100 million that, coupled with his early lead in the polls due largely to famous last name, was why he was immediately crowned the front-runner. Subsequently, it was his “front-runner” title that allowed the Republican establishment to try cloak him with an aura of inevitability.

With Jeb’s title and imaginary aura in place, his campaign strategy was to raise millions of dollars to build a huge national organization that by its very presence would weaken potential opponents by sucking up donors and media attention.

Then, with the organization in place, along with free and paid media support — Bush would rise in the polls and go on to win primaries, the nomination, and ultimately the general election.

It all made so much sense on a spreadsheet!

But, in spring of this year, three months before Jeb officially entered the race, many Republicans, myself included, believed Jeb’s aura of inevitability was a fantasy built on false pretenses.

First, it was obvious that Jeb was intensely disliked by the Republican base for his policy positions on immigration and support for Common Core. Second, his last name was extremely polarizing within the party itself. Third, Jeb was unproven as a national candidate. The last time he was on the ballot was in 2002 for his Florida gubernatorial reelection — today’s equivalent of a stone-age campaign.

Meanwhile, the most glaring early false pretense was that millions of dollars donated by Bush loyalists could buy grass-roots excitement for Jeb.

I sensed trouble when practically no one I knew in Florida Republican activist circles was supporting Jeb’s campaign — and these were the same people who knew him best. Moreover, they all personally liked him, and twice helped elect him governor.

One month before Jeb’s presidential announcement, I felt Jeb’s time had come and gone when national GOP activists were quietly saying, “It was time for a new face,” or “Jeb would have trouble winning the nomination.” Many were even echoing his mother from 2013 with a “no more Bushes” mantra.

All this anti-Bush sentiment from inside the GOP compelled me to write “Five Reasons Why Jeb Should Drop Out Now (before he announces)“ on May 15, 2015.

Among the most notable reasons were that Jeb’s nomination would result in a GOP civil war and running for his brother’s “third term” was a losing proposition for him and the party.

A month later on June 15, Jeb made his official presidential announcement and (surprise) it received a big national yawn. Talk about bad timing! The very next day Donald Trump announced his presidential intentions.

Amazingly, and in a relatively short time, Trump managed to tap into the extreme anger felt by many GOP base voters toward any former or current officeholder — but especially those who represent the ‘establishment’ wing of the party.

And nothing says establishment more than Jeb Bush.

To make matters worse, Jeb has turned out to be an uninspiring candidate even though he does have a more “presidential” demeanor than that guy with the blonde hair.

Bush’s falling poll numbers and lackluster fundraising reflect the fact that as a traditional, well-rehearsed, briefing books, talking points kind of candidate — he is totally out of his league when confronted with the reality show candidacy of Trump — a break all the rules, speak from the gut, know it all, cocky celebrity businessman and media ratings king who is now leading Bush by 20 points among Republican primary voters.

In this widely reported Bloomberg interview, Murphy managed to shower negative attention on himself and by default, Jeb, by disparaging Trump’s front-runner status.

When asked: “How has Trump’s entry changed the race?” Murphy replied, “It created a false zombie front-runner. He’s dead politically, he’ll never be president of the United States, ever. By definition, I don’t think you can be a front-runner if you’re totally unelectable.”

Ironically, Murphy could well have been describing Jeb’s initial front-runner status along with his current presidential prospects.

Surely, “The Donald” will make Murphy eat those words since surprisingly, Trump’s star is still rising and Jeb’s is falling fast. But if Jeb’s star were to rise again, he would need Trump’s help and millions of his supporters. Therefore, Murphy’s remarks have hurt Jeb’s campaign now and could even more going forward.

Finally, as Barbara Bush astutely said in 2013, “He [Jeb] will get all our enemies and half of our friends.” However, she got the second part wrong because recent polls indicate that Jeb is down to less than a quarter of “our friends.”

Unfortunately, because Jeb did not heed his Mother’s warning, a great American political family, that has served our nation honorably, is likely to suffer a major political defeat in the Florida primary on March 15, 2016 and then Jeb’s campaign will be history.