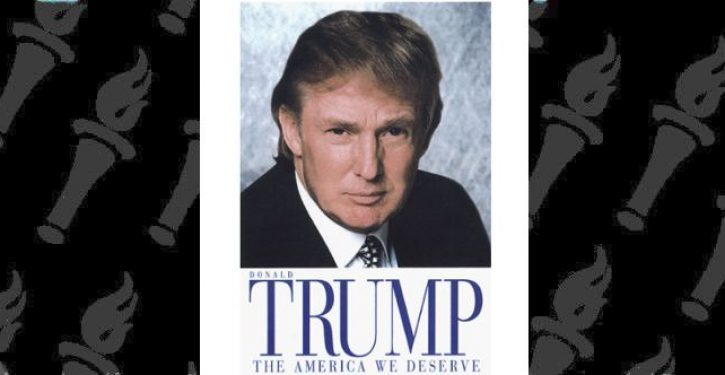 Two hundred millions Americans can be wrong, but maybe in this case not entirely. Put somewhat differently, maybe real estate mogul Donald Trump is not quite as full of it as many observers of the current political landscape have observed.

The latest kerfuffle in which Trump is embroiled is his seeming to blame George W. Bush for allowing 9/11 to happen, an insinuation that has created fresh bad blood between Trump and Jeb Bush, who has risen to his brother’s defense.

But it turns out that Trump authored a book titled “The America We Deserve,” which hit the bookstores in July 2000, 14 months before 19 Islamic terrorist commandeered jetliners and crashed them into the World Trade Center and Pentagon.

The blog PC Graveyard notes that Trump foretold the attack and even mentioned Osama bin Laden by name:

“I really am convinced we’re in danger of the sort of terrorist attacks that will make the bombing of the Trade Center look like kids playing with firecrackers…. No sensible analyst rejects this possibility, and plenty of them, like me, are not wondering if but when it will happen.”

“One day we’re told that a shadowy figure with no fixed address named Osama bin-Laden is public enemy number one, and U.S. jetfighters lay waste to his camp in Afghanistan…. He escapes back under some rock, and a few news cycles later it’s on to a new enemy and new crisis.”

Obviously, none of this is anything that news junkies weren’t already aware of. Nevertheless, it reveals that Trump was following the political scene sooner than many of us may have realized and, therefore, is less of an outsider than critics have asserted.

More quotes from the book are available here.