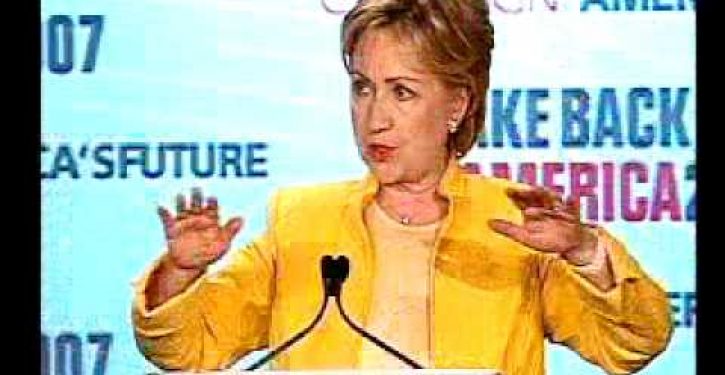 Last night’s Democratic debate seemed to provide the left with the false assurances it craves that (1) climate change (aka global warming) is a priority among voters (it was certainly a priority for the debaters) , (2) the solution to income disparity — which has increased over Barack Obama’s two terms — is best solved by redistributing wealth, and (3) Hillary Clinton, rumors to the contrary, is alive and well.

Despite her often canned responses — count the number of times in this transcript of the debate that she repeated the word values in her first parry with moderator Anderson Cooper — Clinton is viewed by the liberal echo chamber this morning as the winner.

Among millennials, Byron York writes, Bernie Sanders won the evening, having fared well at the “watch parties” his campaign took pains to set up at 4,000 universities across the nation

For my money, the only adult on stage (apart from Cooper, who did an admirable job of asking hard-hitting, incisive questions) was former Virginia Governor Jim Webb. Webb certainly seemed like the most plausible candidate. If nothing else, he was the only candidate among the five who spoke of “working across the political aisle” as a virtue.

But Webb is quite obviously not going to be the Democratic candidate. That title may still redound to Hillary, though it is too early to count out Sanders.

Little that Sanders said will assuage the concerns of the electorate, 50% of whom according to a Gallup poll said they would not vote for a socialist. Cooper cited this statistic as an obstacle and asked Sanders how he’d overcome it. What Sanders revealed in his answer was the first of three things I learned about the senator last night — to wit, he can’t do simple arithmetic:

But one tenth of 1% (0.1%) and 90% don’t add up to 100%. Later on in the same answer, he revised the percentage of rich Americans upward to 1%, but there’s still 9 percentage points that are unaccounted for.

It gets worse. Later in the same speech, he said, “Today, in a rigged economy, … 57 percent of all new income is going to the top 1 percent.” But in April he said 99% of new income was going to top 1%, a claim that PolitiFact found to be mostly true.

The question is really about electability here, and that’s what I’m trying to get at. You — the — the Republican attack ad against you in a general election — it writes itself. You supported the Sandinistas in Nicaragua. You honeymooned in the Soviet Union. And just this weekend, you said you’re not a capitalist. Doesn’t — doesn’t that ad write itself?

Which segues into revelation 2 (actually 2a and 2b): Sanders’s support for the Sandinistas and his having vacationed in the Soviet Union. The exact year when the senator honeymooned in the U.S.S.R. will require further digging because he has been married twice, having divorced his first wife in 1966, marrying his second wife, Jane O’Meara, in 1988. Suffice it to say that this detail and the claim that he supported the Sandinistas both suggest the need to look more deeply into Sanders’s past for other potential closet skeletons. I will endeavor to provide more information in subsequent columns.

The third revelation came during what many regard as the high point of the debate and one of the key applause lines:

Let me say — let me say something that may not be great politics. But I think the secretary is right, and that is that the American people are sick and tired of hearing about your damn [sic] e-mails.

This also drew an appreciative cackle from Clinton and a somewhat tentative handshake. But all Sanders succeeded in demonstrating was his total disregard for the rule of law. That Clinton broke the law by maintaining a personal email server is an opinion shared by a number of legal authorities, among them an attorney and career politician who referred to such actions as “shredding the Constitution.” The name of that politician? Hillary Clinton. Speaking in 2008, during her first presidential campaign, the former first lady said:

Sanders is dead wrong, moreover, in his assertion that the American people are sick and tired of hearing about Clinton’s “damned emails.” One of the reasons for his own surge in the polls and a corresponding decline in her polling numbers is widespread distrust among voters over the email scandal.