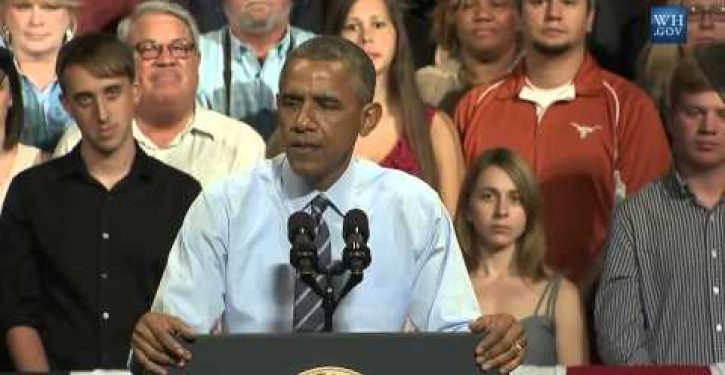 The setting for the above quote was a high-ticket Democratic fundraiser last Friday, which provides a clue that it was not a Republican who said it.

Another clue is the context: The words were spoken during remarks on the current disarray in the House of Representatives following last week’s bombshell announcement by Rep. Kevin McCarthy that he would not replace John Boehner as House speaker.

The source of the quote? Who else but Barack Obama, who declared in the same breath that the Republican Party has “gone off the deep end.” Interesting choice of metaphor for a man who has been over his head for the last eight years in a job he was never suited to do.

But that’s not how Obama sees it. In December of 2009, following a very rocky first year as president, Obama was asked by Oprah Winfery in an interview, “What grade would you give yourself for this year?” He didn’t miss a beat in answering, “A solid B+.” More recently, in a speech to the African Union, he enlarged on that opinion, saying, “I actually think I’m a pretty good president. I think if I ran [for a third term], I could win.”

He doubtless sees himself as modest, too!

In his truthful assessment last Friday, he also explained that he’s so non-partisan that “some members of his party have faulted him for not being partisan enough.”

Obviously, Obama’s long-time defenders in the mainstream media weren’t brought up to speed on this point. Last month, Jonathan Bernstein of Bloomberg View addressed the topic of Obama’s partisanship, pitting Princeton Professsor Kevin Kruse, who called Obama the “least partisan president” of the “modern era,” against Joe Scarborough, who tweeted:

After Iran, President Obama has assured his place as the most partisan president in U.S. history. Historians will be left to assess blame.

Bernstein’s bottom line was “If I had to choose sides, I’d go with Scarborough. ”

Obama’s Bay of Pigs: The tragic ending
Next Post
Black supporter goes off at Trump rally: ‘Obama has failed us’