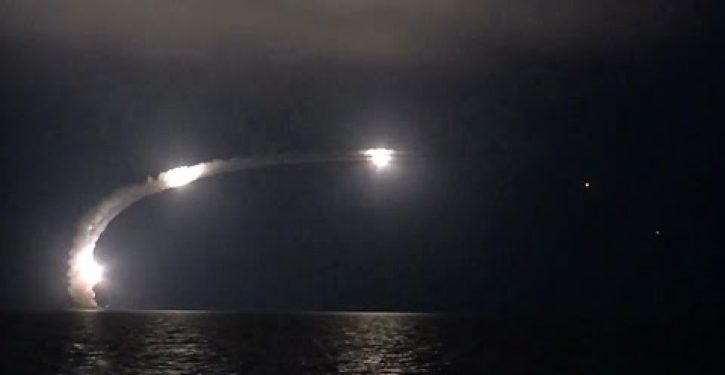 The Pentagon released information Thursday that some of the cruise missiles launched by Russian warships into Syria the day before (Wednesday, 7 October) had crashed in Iran, instead of making it to their targets.  The missiles were launched from the Caspian Sea, between Iran and southern Russia.

The global audience was apt to note the point that four of the 26 missiles launched by Russia crashed.  But the more important point is that Russia launched the missiles in the first place.

The question is why.  The answer is not darkly nefarious (not particularly, anyway), but it’s not obvious from the standpoint of tactical military operations either.

The stage can be set with the background that Russia, the Syrian regime forces, and Iranian forces deployed to Syria started a major offensive against rebel groups this week.  The strongest push appears to be in the major north-south line of communication (LOC) between Aleppo and Homs, anchored by Idlib and Hama.  This area has little to no Islamic State (ISIS) presence.  The rebels under attack there belong to the Free Syrian Army, the Al-Nusra Front, and other minor groups.  (See Map 1 below.)

The push also features a less concentrated assault in the ISIS stronghold of Raqqa Province, including a campaign to recapture portions of Deir Ez-Zor which were lost to ISIS over the past year.  This latter effort appears to be especially close to the hearts of Syrian regime supporters.  The Syrian forces are in the lead on the ground.

In fact, a quip from Syrian General Issam Zahreddine, commanding the forces in Deir Ez-Zor, went viral among excited regime fans on the 7th:  ISIS, he said, is closer to Hell than to Deir Ez-Zor airport.  He promised the airport wouldn’t fall.

According to reports coming over Twitter, Russian aircraft have had some involvement in the Raqqa push.  Russian helicopters reportedly conducted attacks in Deir Ez-Zor on 5 October.  (Notably, the limited range of helicopters – the Russian helos are based on the Syrian coast – suggests that if this report is valid, the Russians probably staged somewhere closer to Deir Ez-Zor in order to provide this support.)

ISIS frantically retreated from the Army Base at the Deir Ezzor Airport after Russian helicopters annihilated their encroaching comrades.

And several sources reported five Russian Su-34 Fullback tactical bombers attacking targets on the outskirts of Raqqa on 8 October.  (There was some confusion, however, as to whether the planes were Russian or coalition aircraft.)

But the great majority of Russian air attacks are in western Syria, in the rebel strongholds around Idlib and Hama.

This distribution of effort is borne out in the Russians’ own depiction (by the ministry of defense) of their cruise missile attacks on 7 October.    A couple of flight paths are shown for missiles headed to targets near Raqqa.  But virtually all the missiles were headed toward the western LOC between Idlib and Hama, where the rebel forces – some of them U.S.-backed – have their bases.

It’s important to note, before moving on, that the U.S. coalition has also been conducting attacks in the vicinity of Raqqa in the last several days.  The attacks by the U.S. coalition aircraft are actually on ISIS targets, and have been centered on Raqqa.

It can be roughly stated that during this 3-4 day period, U.S./coalition aircraft have attacked ISIS targets in Raqqa for general interdiction, whereas Russian aircraft – and maybe two or four cruise missiles – have occasionally attacked targets in Raqqa in direct support of Syrian army forces on the ground.  There is no evidence of a continuous or on-call presence of Russian assets for close air support in Raqqa.  The Syrian regime does say its own air assets have been involved in the Deir Ez-Zor fight.  But, as Yochanan Visser indicates in his summary from Thursday, the Russian claims of attacking ISIS, per se, continue to be significantly exaggerated (when they’re not outright false).

So why do I say there’s no apparent military reason for Russia to launch long-range missiles from the Caspian Sea?

Because the best tools for the job Russia is doing – supporting a ground offensive against an enemy that moves around a lot, fights in small groups, and largely avoids maintaining big garrison-like concentrations – are the tactical assets Russia has deployed into Syria, and is already using there.  Russia’s tactical bombers – Su-24s, Su34s – and attack helicopters are the tools of choice for this military task.  Where Russian forces are in contact on the ground, mobile artillery can be an even better asset.

The U.S. doesn’t use Tomahawk missiles for this operational task, and we wouldn’t expect the Russians to either.  Even where a cruise missile may be well suited to a particular target – e.g., the reported attack on an ISIS weapons depot* near Al-Rusafa, southwest of Raqqa – tactical bombers are at least as good for the task, if not better.  They would normally be the platform of choice, if they are already present and operating freely in the area.  Russia’s bombers clearly meet both criteria.

It looks to me like Russia launched the cruise missiles for two reasons.  One was to demonstrate that she can.  Basically, Russia was showing off.  (I imagine there was an element of “proof of concept” in the missile barrage as well.  But the self-propelled media fanfare that followed the event was a lot of regime showmanship.)

But the other was to demonstrate that Moscow has permission from Baghdad to use what is still formally Iraqi air space.  There’s no real question that the Iranians will allow Russian missiles to go through their air space.  But Iraq still has a pro forma tether to the U.S. regarding national defense – and is hosting a big concentration of U.S. forces, including strike-fighters, in the northern Iraqi-Kurdish enclave of Irbil, which lies in the path of Russia missiles coming from the Caspian.  (See Map 2 for the discussion here.)

This concentration of U.S. forces would also lie in the path of bombers coming from southern Russia – or airborne early-warning and command/control aircraft, for that matter.

If Russia wants to be able to “fight the whole air space” – all the way from southern Russia to Syria – she needs to neutralize the potential spoiler represented by the U.S. presence in northern Iraq.  Russia also needs to eliminate the inconvenience of “sneaking” tactical aircraft into Syria as she did in the days before the ground offensive started.  Operationally, it’s very limiting to employ only aircraft that are actually based in Syria.  Russia would prefer to have the option the U.S. has to operate from neighboring territory.

The day before the cruise missile launches, reports emerged in Western media that Iraqi leaders were pushing for Russian air strikes inside Iraq.  The implication, which reinforced an earlier report in the Washington Post about Prime Minister Haider Al-Abadi, was that the Iraqis would welcome air support from a partner more enthusiastic about defeating ISIS and regaining territory.

The cruise missile barrage from the Caspian followed hard on the heels of this political push.  It should be read as an emphatic statement that Russia intends to make use of the entire air space traveled by the cruise missiles, and that Iraq has no objection.

Assuming the Iraqis continue to not object, there won’t be anything the U.S., under Obama’s leadership, can really do about this emerging military condition.

U.S. forces can expect to be shouldered aside and marginalized, which is what’s happening in Syria.  The sharing of Syrian air space may have begun with robust-sounding assertions of U.S./coalition prerogatives, but as the days wear on, that’s changing.  You just aren’t seeing it reflected in the headlines.  But when military spokesmen say this (emphasis added):

Russian fighter jets shadowed U.S. predator drones on at least three separate occasions high above Syria since the start of Russia’s air campaign last week, according to two U.S. officials briefed on this latest intelligence from the region.

Meanwhile, U.S. Navy Captain Jeff Davis told reporters a U.S. aircraft flying over Syria had to be rerouted to avoid a Russian fighter jet at least once.

“We have taken action to maintain safe separation,” Davis said, adding that the U.S. aircraft “changed path a little bit.” He did not disclose which type of U.S. aircraft was involved.

… it means the U.S. forces are backing down.

The operational latitude it gives Russia and a Russia-Iran coalition to have Iraqi air space at their disposal is a game-changer.  In the short term, it means Russia can flank Turkey and approach Syria from two directions.  The biggest beneficiary in the long run is likely to be Iran, although the Russians’ intention is to retain control of what Iran’s options are within this Russian-carved military theater.

We can assume the Russians didn’t lob so much of the ready arsenal of their Caspian fleet’s cruise missiles on Wednesday just so they could take some cool pictures of the event.  They wanted to make an impression, in more ways than one.  They’re moving big and moving fast now.

* The attack in this area (Al-Rusafa) was reported as targeting the weapons depot.  According to locals, who posted images on Twitter of what may be the nose cone of a Russian missile, two cruise missiles did strike in the vicinity, but hit an open field and did not affect the weapons depot.

@bocijn @Sema4beach
No this is not true
it fall on Empty land in Tabqa 🙁 pic.twitter.com/yzcvLCUO4w

Charity stops aid in Calais: 97% of migrants are males and not actual ‘refugees’
Next Post
Harry Reid suing exercise band company for ruining his sex life