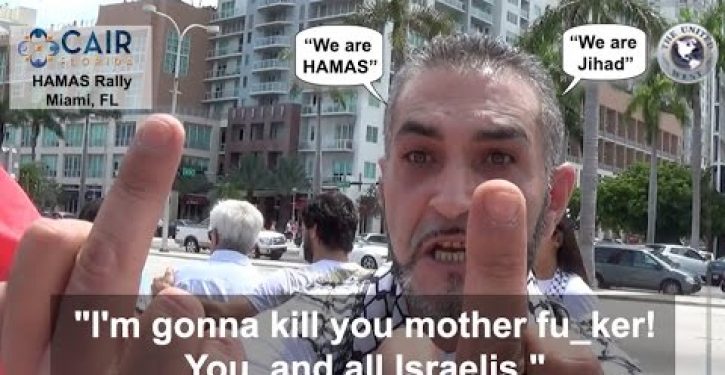 The street theater of Islamism isn’t as far along in the United States as it is in Europe. But it’s here.

You aren’t likely to see it covered by the mainstream media.  It’s not clear that the network affiliates would have covered the disruption to a pro-Israel rally in Los Angeles on 13 July if a U.S. Federal Protective Service officer hadn’t discharged his weapon during the altercation.  In that case, a counter-group of pro-Palestinians drove up on the edge of the pro-Israel crowd (which numbered about 1,200) and physically assaulted some of the demonstrators.

On Tuesday, Right Wing News carried Cassy Fiano’s report of another altercation in Miami, this one involving pro-Palestinian, pro-jihadi, pro-Hamas protesters.  You don’t have to take my word for it that they were “pro” all these things.  They said so explicitly during their demonstration — ironically enough, in front of the Torch of Friendship monument on Biscayne Boulevard downtown (where protests are often held).

A reporter for The United West — a reporter who is Jewish — was recording the pro-Hamas demonstrators.  Several of them tried to physically intimidate him (including pushing), and one threatened to kill him.  During the event, the reporter recorded demonstrators cheering for Hamas, calling for jihad, and shouting the universal jihadi chant:

(Remember Khaybar, O Jews, the army of Mohammed is returning!)

Khaybar, in ancient Arabia, was the site of a massacre of Jews by Mohammed in A.D. 629.

The first video (United West) has the intimidation and accosting of the Jewish reporter (caution: strong language):

A second clip from video of the same event has a good view of the protesters in full jihadi chant (h/t: Legal Insurrection):

Cartoon of the Day: Obama’s workshop
Next Post
Tweet of the Day: As world burns, Obama ‘jokes’ that press forgot his birthday