For some months, Obama has been emitting signals about his enthusiasm for the Australian model of “gun control” – or, as it is more accurately known, “gun confiscation.”

Charles C.W. Cooke keyed on Obama’s reference to Australia back in June, in an interview with comedian Marc Maron.  Cooke quoted a Washington Post story at The Corner:

“It was just so shocking the entire country said, ‘Well, we’re going to completely change our gun laws’, and they did. And it hasn’t happened since,” Obama said, discussing the shooting deaths of nine people at a historic black church in Charleston last week. …

“We know that other countries, in response to one mass shooting, have been able to craft laws that almost eliminate mass shootings,” the president said. “Friends of ours, allies of ours — Great Britain, Australia, countries like ours. So we know there are ways to prevent it.”

Mark Antonio Wright argued – also at NRO – that gun confiscation didn’t work in Australia the way Obama implies it did.

One thing we can say for sure is that gun confiscation hasn’t made it impossible for 15-year-olds in Australia to get hold of guns, and do dangerous – even fatal – things with them.

We know this because on Friday, the day after the shooting in Roseburg, 15-year-old Farhad Jabar Khalil Mohammad stormed a police station in Sydney, Australia and killed Curtis Cheng, a finance worker whose death left a wife and two children bereft.  The teen (whom Australian news sources are referring to as Jabar) got past an unarmed security sentry at the station, and kept firing his gun until he was killed by armed responders.

Jabar reportedly went to his mosque just before the attack, and changed into black clothing there.  He is said by witnesses to have “danced joyously,” shouting “Allah” repeatedly, after shooting down Curtis Cheng.

Australian authorities are trying to figure out why Jabar did this.

Police Commissioner Andrew Scipione…admitted they were still unsure of the schoolboy’s ‘exact motivations’.

‘We’re a long way from establishing a full picture of this man, his exact motivations still remain a mystery to us,’ he said.

And they’ll be trying to figure out how he got hold of a gun – which wasn’t supposed to happen.

Mr Scipione said detectives would be…investigating how the 15-year-old had access to a firearm.

Maybe it was through the illegal gun-smuggling trade, which for some reason Australians continue to engage in, even though they’re not supposed to.

Jabar’s weapon was described as a handgun.  Joyce Lee Malcom reported, in the Wall Street in Journal in 2012, that handgun use has soared for violent crime in Australia – and virtually all handguns used in crimes are unregistered (and therefore held illegally):

According to their study, the use of handguns rather than long guns (rifles and shotguns) went up sharply, but only one out of 117 gun homicides in the two years following the 1996 National Firearms Agreement used a registered gun.

That, too, was not supposed to happen. 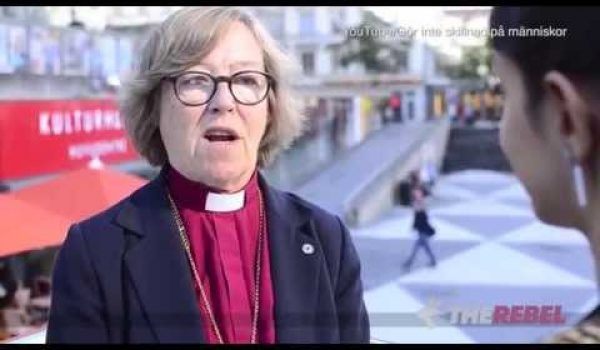 Lesbian bishop suggests removing crosses from church to make it welcoming for Muslims
Next Post
Tweet of the Day: Ivy League professor calls Ben Carson what?