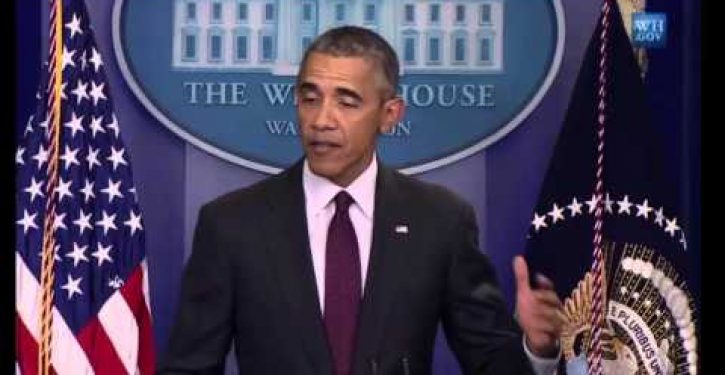 If you missed Barack Obama’s comments on yesterday’s mass killings in Oregon, you didn’t miss much.

As you can see by watching the video that appears at the end of this post, he claimed — correctly — that shootings like the one at Umpqua Community College in Roseburg, Ore., have become “routine,” as have his reactions. He further acknowledged that some will accuse him of politicizing the murders. Done and done.

Where Obama went wrong was in the “facts” he cited to support his call for “common sense” legislation to curb future mass killings. One was the claim that “polling” shows that “the majority of Americans understand we should be changing these [gun] laws.” Here, to test that assertion, are the results of a Gallup survey that probes the nation’s response to the stringency of gun laws over a span of two decades.

While it is true that the percentage of people who favor stricter gun laws is greater than the percentage of those who favor the status quo or less stringent laws, the trend lines reveal that public opinion has gradually shifted toward a preference for less government intervention.

Elsewhere in the speech Obama said, “We know that states with the most gun laws tend to have the fewest gun deaths.” But Oregon, the state where the murders occurred, just recently strengthened its gun laws. Making matters worse is that Umpqua Community College, according to its student code of conduct, is a gun-free zone:

Lastly is an observation Obama made last night that recalls a similar remark he made in June following the Charleston shootings, when he said:

Let’s be clear: At some point, we as a country will have to reckon with the fact that this type of mass violence does not happen in other advanced countries. It doesn’t happen in other places with this kind of frequency.

But a chart compiled by the now-defunct website RampageShooting.com compares mass shootings in the U.S. and eleven other developed nations. It turns out these incidents occur 21 times more frequently in Norway and two and a half times more often in Finland than they do here. In summary, there are five countries that have a higher rate of rampage killings than the U.S.

Here is the video of Obama’s impassioned remarks.

Why school refused to let 9-year-old use prescription inhaler during coughing fit
Next Post
One of the ‘costliest regulations ever’: Obama administration drops new ozone rule