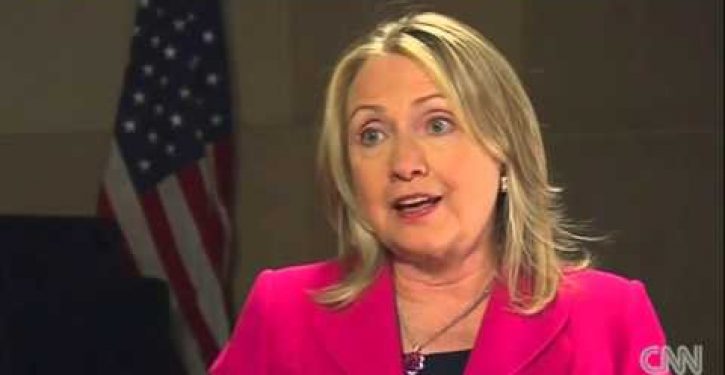 I don’t know that there’s much to laugh about in the face of Vladimir Putin’s out-maneuvering of Barack Obama in Syria to protect dictator Bashar al-Assad and make the U.S. government look impotent, but if there is a last laugh, Mitt Romney is having it. When Romney warned in one of the 2012 presidential debates that Russia posed the greatest geopolitical threat to the U.S., Obama ridiculed him with a variant of a line from a “Seinfeld” episode.

But nearly forgotten is that the leading candidate for the 2016 Democratic Party nomination also bashed Romney for his warning about Russia. A half-year before the debate, appropriately on April Fool’s Day, Hillary Clinton was asked in an interview by CNN’s Jill Dougherty about Romney’s warning about Russia first made in a March 27 op-ed in Foreign Policy. The then-secretary of state made an observation similar to Obama’s, minus the snideness, accusing the GOP candidate of looking backward instead of forward:

Well, without getting into the political campaign because that’s for others to comment on, I think if you take a look at the world today we have a lot of problems that are not leftovers from the past but are of the moment. We’ve just been talking about one, namely Iran. And in many of the areas where we are working to solve problems Russia has been an ally. You know, they’re in the P5+1 talks with us; they have worked with us in Afghanistan and have been very helpful in the northern distribution network and in other ways. So I think it’s somewhat dated to be looking backwards instead of being realistic about where we agree, where we don’t agree, but looking for ways to bridge the disagreements and then to maximize the cooperation.

This raises the questions about Hillary Clinton’s vision and whether she has a clear enough understanding of foreign policy to be our commander-in-chief.

Teachers rebel against their union’s planned Clinton endorsement
Next Post
Color of change: The unwanted surprise you get when you eat BK’s ‘Halloween Whopper’