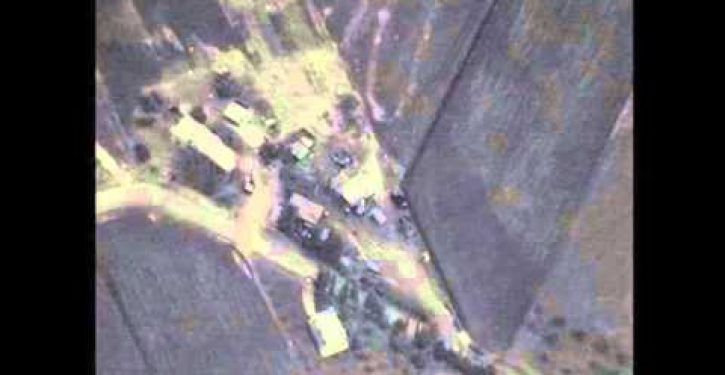 The moral of this story is: don’t send Barack Obama to negotiate your operational modus vivendi with Russia in a combat zone.

On the first day of Russian air strikes in Syria, Russia surprised the U.S. by sending a general officer to the American embassy in Baghdad to issue a “demarche,” or a unilateral demand or statement of intent.  The general – who is stationed with the new joint intelligence command center set up in Baghdad by Russia, Iran, Syria, and Iraq – said Russia would be conducting strikes, and he “requested” that U.S. forces remain clear of the Russian operating area.  (See video.)

Pentagon officials point out that that’s not what anyone meant by proposing to coordinate with Russian forces in Syria.  (Emphasis added.)

According to a U.S. senior official, Presidents Obama and Putin agreed on a process to “deconflict” military operations. The Russians on Wednesday “bypassed that process,” the official said.

“That’s not how responsible nations do business,” the official said.

The development came after Pentagon officials, in a development first reported by Fox News, brushed aside an official request, or “demarche,” from Russia to clear air space over northern Syria, where Moscow said it intended to conduct airstrikes against ISIS on behalf of Assad, according to sources who spoke to Fox News. The request was made in a heated discussion between a Russian three-star general and U.S. officials at the American Embassy in Baghdad, sources said.

“If you have forces in the area we request they leave,” said the general, who used the word “please” in the contentious encounter.

U.S. officials said the request was not honored.

“We still conducted our normal strike operations in Syria today,” the official said. “We did not and have not changed our operations.”

That’s nice.  But this is not a sustainable, manageable situation.  It’s the most unstable, dangerous situation we’ve seen for a long time: two of the world’s best-armed nations flying around in confined air space shooting at things, and not coordinating with each other.

Predictability won’t be a helpful feature of Russian operations either, apparently.  After all the talk of attacking Islamic State targets, the Russian Su-24 Fencer D tactical bombers actually struck targets in an area of Homs reportedly held by the Free Syrian Army.

There have been reports that the Russians attacked U.S.-supported factions, but that precise claim hasn’t been substantiated as far as I can tell.  However, Andrew Bostom’s point in this tweet is worth pondering, as it highlights a level of historical reality that the U.S. has basically dismissed in the Obama approach to Syria — trying to pick and choose among rebel clients as if it doesn’t matter who they are.

The Russians may well have hit targets worth hitting, from one narrow slice of the big picture standpoint.  In any case, the strikes didn’t hit anywhere near an ISIS target.

A senior U.S. administration official told CNN’s Elise Labott that a Russian airstrike near the Syrian city of Homs “has no strategic purpose” in terms of combating ISIS, which “shows they are not there to go after ISIL.”

This should have been no surprise, of course.  Russia’s military purpose in Syria is only collaterally about ISIS.  It’s mainly about driving the Russian stake into Syria so that Russia becomes the main great-power broker of the Middle East’s future.

(This is why people have got to stop thinking Russia will wear out or become stuck in a quagmire in Syria.  No matter what happens, that’s not even possible – because Russia has no intention of ever going home.  Being in Syria is the point now.  Get the old U.S.-era, expeditionary fight-and-go-home idea out of your head.  We’re in the post-Pax Americana period now.  Sure, having to fight guerrillas in Syria is less enjoyable than doing Syrian coffee shots and renovating a summer home on the Mediterranean coast, but it’s still all good.)

Reports are also emerging that the Russian strikes were inaccurate.  The Aviationist has video that seems to show the ordnance hitting well off the center mark.  In fact, the video doesn’t seem to be connected to any integrated guidance process; it’s just watching the ordnance hit.

This Russian campaign will serve to remind the world that there are no nations other than the United States and Israel that bend over backward to accomplish military tasks but also do as little damage as possible.  Russia is in Syria using the same ordnance the Syrian regime has.  Where Russia has different, more modern weaponry, it will be more lethal.  It won’t be engineered or employed to do less damage for the same targeting effect.

Get used to it.  This is the world as it is without American power setting standards and boundaries.  After a 70-year hiatus from history, nothing you think you know applies to this situation.  This is the world of 1900 – 800 – 500 B.C. – but with much more destructive weapons, and much faster ways to get around.

Why do conservatives let men off so easy in the great abortion debate?
Next Post
No, OCR’s April 4, 2011 Dear Colleague letter is not entitled to deference