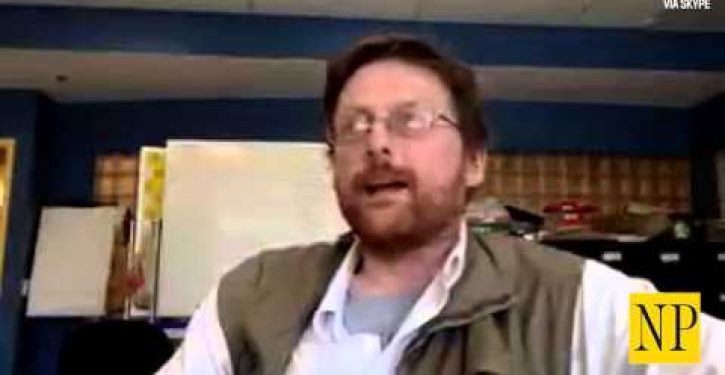 If thine eye offend thee and all that.

Face it: Caitlyn (nee Bruce) Jenner, who graced the cover of “Vanity Fair” back in June, is so yesterday. A new “cause” has emerged that makes sex reassignment surgery look like child’s play.

So hello to the “transabled” movement, the logical next step in realizing the dream of living inside the body nature intended you to have. Transabled individuals believe they were born with extra limbs that don’t really belong to them and need to be excised.

An article in Canada’s National Post chronicles the struggles of a man born Jason who now calls himself One Hand Jason. For months, Jason “tried different means of cutting and crushing the limb that never quite felt like his own.” When he finally succeeded in severing his arm with a “very sharp power tool,” he initially lied about what happened, telling people it was an accident.

Jason, the article goes on to explain, was stigmatized by a society that views self-mutilation as a sickness — as opposed to how Alexandre Baril, a Quebec-born academic, views it: i.e., as the newest normal. Baril, who is himself disabled and transgender, is quoted as saying:

We define transability as the desire or the need for a person identified as able-bodied by other people to transform his or her body to obtain a physical impairment.

Amputation, in Baril’s view, is no different from cosmetic surgery. Both, he insists, are means by which a person moves closer to his ideal self-image. The problem with this point of view is that while societal standards of beauty may dictate — rightly or wrongly — that a big schnoz is ugly, rhinoplasty does not leave the patient disabled.

Clive Baldwin, who teaches social work at St. Thomas University in New Brunswick., has interviewed 37 people worldwide who self-identify as transabled. Most of them, he reports are men. Most, moreover, crave an amputation or paralysis, though one person he  spoke with wanted his penis removed, while another expressed a preference for being blind.

Not surprisingly, the transabled movement has encountered resistance, though — very surprisingly — one of the groups opposed to it is the transgender community.

The big question is whether liberals will jump on this latest bandwagon. Will they argue that lopping off an arm or leg is every American’s right and that suggesting that the victim needs help is intolerant? Can we expect to see liberated parents proudly parading on the cover of some weekly magazine the limbless stump that they gave birth to several years earlier?

Currently, transability is classified in the Diagnostic and Statistical Manual of Mental Disorders (DSM) as body integrity identity disorder, though Baril and his ilk want to see it “de-pathologized.” That is what happened to transgenderism in 2013, when for purely political reasons the condition, known as body dysmorphic disorder, was renamed body dysphoria, which is far less judgmental.

[Note: This article was originally posted in slightly altered form on June 3, 2015.]

Students scoring low on standardized test? No problem, says U. of Texas, which has adopted this ‘fix’
Next Post
Whistleblower who was fired from VA facility now barred as well