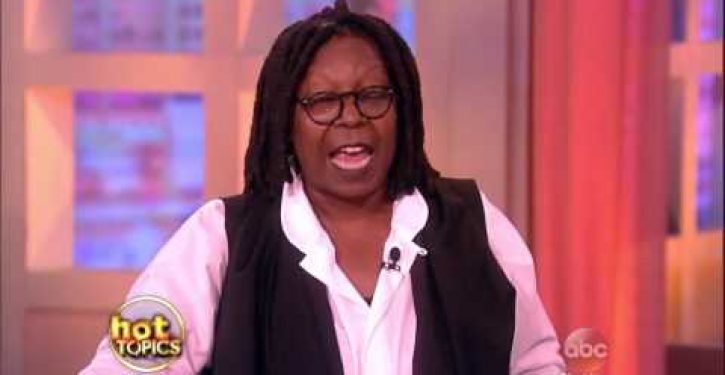 I’m guessing that the reaction of many readers will be “Does it matter?” The unappetizing command arose in response to a statement during the CNN debate by GOP presidential hopeful Carly Fiorina regarding one of the Center for Medical Progress videos. Calling Fiorina a liar, View maven Whoopi Goldberg went on a fact-challenged rampage that ended with the request I am totally happy to comply with.

The comment Fiorina made that has sparked such high emotion on the left included a descriptiono of a fully formed fetus kicking on a table, while Planned Parenthood employees discuss harvesting its brain. To be honest, I have seen all the videos and remember the discussion but I refuse to go back into the videos to find if they actually showed the scene described. Even if it was only a discussion, there were too many other horrifying shots of dead babies and baby parts for me to want to review any of the footage. (Lets face it: Those videos are some of the few things in this world that are actually more revolting than the idea of being inside Whoopi’s vagina.)

Goldberg went on to opine that abortion is what God wants. “God said, ‘Come to me; if you have an issue, come to me. Nobody else can judge you.'” (I’m not sure what chapter or verse of Scripture she is quoting, but I recall one major command that also seems relevant: “Thou shalt not kill.”)

At the end of her statement, Goldberg exclaimed:

If you think this [de-funding Planned Parenthood] is going to stop women from doing it, it’s not. People who are desperate enough to go and get an abortion, there’s a reason they need it.

Tweet of the Day: The tweet heard round the world (and the latest microaggression)
Next Post
A three-word message the American people shouldn’t ‘read too much into’