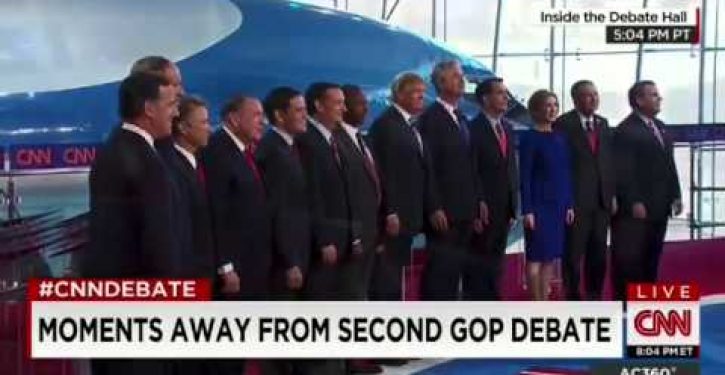 At 6’3″, Jeb! is already the tallest candidate in the GOP field.  Numerous commentators have pointed that out in the last few hours — because on Wednesday night, as the candidates lined up for their photo op before the debate, Governor Bush rose up on tiptoe — several times, according to alert witnesses — and made himself a few inches taller.

As with his somewhat odd choice of Margaret Thatcher to be the new face of the $10 bill (Thatcher, of course, while a great stateswoman, was British), Jeb! found himself explaining the moments on tiptoe the next day.  He says he was looking for his wife in the audience:

“I was looking over to the press to see where my wife was sitting because she’s the love of my life and just I need to have eye contact with her before we started,” Bush explained. “You’ve been married 42 years that’s the kind of thing you do.”

I see no reason to disbelieve him.  That said, Jeb! does seem to have to “explain” an awful lot.  One begins to get the uneasy sense that a Jeb! presidency would be a sort of ongoing, multifaceted pratfall.

That said, Bush’s turn on tiptoe does raise an interesting possibility for outfacing, say, Vladimir Putin, in the all-important realm of non-verbal communication.  It’s a simple tactic, one somebody should probably have thought of before.  If it doesn’t come naturally to Bush, his advisors could simply remind him, when he’s up there on a platform with Putin, “Jeb!  Remember to look for your wife.”