Most eyes will be on Denver and Kansas City this evening, straining to see if Peyton Manning looks like he’s still got it, but the ACC match-up featuring #11 Clemson at Louisville won’t necessarily be chump change.  (Notice how we’re hedging our bets on that one. Update: Not bad, not bad.  Louisville hanging in there better than anticipated.)  Tigers give 6.

The University of Tulsa Golden Hurricane, which beat Notre Dame 28-27 on 30 October 2010, tootles down the turnpike to have a valuable learning experience against Hilarious #16 Oklahoma in Norman.

The Sooners came out of Knoxville on Saturday with the second-least-deserved win of the weekend (the Dallas Cowboys took top honors), and climbed three spots in the AP poll, apparently because there’s been a colossal loss of common sense.  The incredible Imploding Volunteers dropped out of the top 25 after failing to defend a 17-3 lead against a leaderless Oklahoma offense in the 4Q.

The OU defense wasn’t atrocious in Knoxville, and should shut down Tulsa pretty effectively.  Switching places, Tulsa’s “see if something sticks” style of secondary coverage and tackling might actually work, some of the time, against Oklahoma’s new coyote-chasing-the-roadrunner offense.

Sooners give 30, which may be a tad optimistic.  On the other hand, Oklahoma did cover the 2 versus Tennessee.

New #25 Oklahoma State, poking its head into the rankings mezzanine, hosts UTSA, which manfully took a beating from Kansas State last Saturday.  We’re not clear on why the Cowboys are being put at 25; Central Arkansas is terrible and the Pokes weren’t that dominating.  But hey, we’ll take it.  Need we mention that UTSA meets the world of sport as the Roadrunners, and they’re on the receiving end of 24.5 in the line?

Navy hosts East Carolina, now an American Conference rival (although from the other division).  The Purple Pirates gave Florida a scare last week; Navy gives 4-ish, but counting pre-hatched chickens is not advised.

Army’s 0-2 after a couple of painful losses, and is probably facing a third hosting Wake Forest (-6) on Saturday.  Air Force will be pulling major g’s in East Lansing, where #4 Michigan State, now officially Top Green, is hosting the world.  If you were wondering: no, Air Force and Michigan State haven’t played before.  Spartans give 26.

Virginia Tech heads to West Lafayette to take on Purdue, and danged if this isn’t the first time those two teams are playing.  Both teams comes in 1-1, but the Boilermakers’ loss was to Marshall, as opposed to VT’s loss to Ohio State.  Basically, Purdue continues its bottom-tier funk in the Big X.  Hokies give 7.

Nevada served as a nice prop for Arizona’s climb from #22 to #20 last week, and isn’t being given much of a chance in the excursion to #17 Texas A&M on Saturday.  Aggies give 34.  We’re hoping to get the game here, but SEC Network games are dicey in this time zone.

#3 TCU held position destroying a hapless Stephen F. Austin last week, and will presumably do the same hosting SMU in their annual rivalry face-off for the Iron Skillet.  As we’ve noted before, a good iron skillet isn’t so awful easy to come by these days, so we applaud the teams for going all-out for such a prize.  (And, yes, it’s an actual iron skillet.)  Toads give 37.

#13 LSU crept up one slot in the rankings, and has the chance to make a statement hosting #18 Auburn on Saturday.  Auburn has been unimpressive so far, falling out of the top 10 after needing overtime to beat Jacksonville State.  So LSU will need a thumping win to make a case.  Block for Fournette, is our advice.  LSU gives 7.

Kansas State will be back in Manhattan hosting Louisiana Tech (motto: Still recovering from the WAC nightmare).  The Bulldogs did lose a squeaker to Western Kentucky last week, and we’re with the oddsdudes on K-State’s 10-point advantage.  But don’t get cocky, Wildcats.

Wyoming heads to Washington State looking for the Cowboys’ first win.  WSU came back from the ignominy of losing to Portland State in Week 1, knocking off Rutgers 37-34, and the line has the Cougars giving 24.  That’s probably optimistic, but we figure Wyoming will be putting another one in the self-improvement column on Saturday.

#1 Ohio State gives 34.5 hosting Northern Illinois.  #2 Alabama has the game of the week hosting #15 Ole Miss in their SEC West/rivalry match.  The game kicks off pretty late by SEC West standards (8:15 PM Central), but we don’t think that will slow anybody down.  Tide gives 7; be there.

#5 Baylor has the weekend off, and can profitably spend it slapping the Bear defense around until its morale improves.

USC has surged to #6 on the strength of big wins over Arkansas State and Idaho, and we’re not convinced here.  The Trojans host the Misty Mauve, which beat UCF last week to get back to 1-1, but is also unconvincing so far.  The oddsbubbas show USC giving 10 – and that, we do find convincing, which says a lot.  (This is a rivalry game, of course, but this year, who cares?)

#7 Georgia hosts South Carolina, giving 16.  “#8” Notre Dame hosts #14 Georgia Tech; the Yellow Jackets give 2.5, reflecting the sense of the sensible that the Arsh are overranked.  Tech has seen action only against much weaker teams so far (Alcorn State and Tulane), but has been Sherman on the march in both outings.

Florida State has slithered up to #9, and isn’t likely to lose position out of the match-up Friday night at Boston College.  #10 UCLA hosts #19 BYU, giving 16.  (The two teams last played in 2008, with the Cougars shutting the Bruins out 59-0.  Different era for the UCLA program.)

Penn State will host Rutgers, and we foresee the Nittally Cats putting another one in the win column.  The oddsquad agrees; PSU gives 9 in the line.

Sudden Cal travels to Texas, but gives only 7, presumably because the Bears are still pretty Sudden.  It’s only Week 3.

In other games of interest, the trend of first-time match-ups continues with UConn traveling to take on #22 Mizzou on Saturday.  Tigers give – naturally – 22.

Rivalry action sees Cincinnati at Miami (OH) in one of the FBS’s many battles for a Victory Bell.  We trust you don’t need images of victory bells to get in the mood for these things.  Cincinnati gives 20.

Colorado (motto: “We take a pounding!”) heads to Colorado State for the Rocky Mountain Showdown, which annually distributes the coveted Centennial Cup.  There are cooler football trophies (viz. the kitchen implement favored in the hip DFW metro), but there aren’t too many that get played for at a higher elevation.  Buffaloes give 3.

We mention Tennessee’s home stand against Western Carolina (FCS, Southern) only because WCU’s team name is the Catamounts, and we’re fans.

In FCS, McNeese State will be in Nacogdoches to take on Southland rival Stephen F. Austin (lately the victim of TCU in a 70-7 drubbing).  McNeese State climbed to #21 in the FCS Coaches Poll after the decisive win last week over Incarnate Word.  Weather forecast at game time: unspeakable.  90s lingering in the Coastal Bend humidity at 6 PM Central.

In Div III, 2-0 Rose-Hulman hosts Heartland Conference foe Hanover College for the Fightin’ Engineers’ homecoming game.  Hanover has scored a total of 14 points in two lopsided losses so far; RHIT is likely to tote off the honors.  70s and clearing from morning storms for the 2 PM kickoff in Terre Haute.

Christopher Newport heads to Dover, DE for a conference match with Wesley College, ranked #5 in the D3 Football Poll.  Wesley reached the Div III semifinals last year, being sent home only by D3 powerhouse Mount Union.  (It will be of interest to some readers that Wesley blanked MIT 59-0 in the final game of the regular season.)

CNU’s overmatched in this one, but will have a great learning experience, we’re sure.  80 and overcast for the 1 PM Eastern kickoff.

Merchant Marine hosts SUNY Maritime on Friday night (set your reminder alarms).  SUNY Maritime comes in 1-1, having thumped Maine Maritime but succumbed to Massachusetts Maritime 48-13.  USMMA comes off the win over Coast Guard and may have a chance.  The weather couldn’t be better for a 7 PM kickoff, crisp and in the 60s.

Denver holding it close as the 3Q wears on.  Frankly, no major revelations emerging from this AFC West showdown.

Sunday’s early slot tees up a quality outing for the Steelers, with the Niners coming to town.  The oddspuppies show Pittsburgh giving 7, but we think that’s an optimistic spread.  Saints give 10 hosting the Bucs.

Cowboys will get the opportunity to annoy another NFC East rival, visiting Philly for the Sunday afternoon game.  Iggles give 5.  LOOOO-sers.

Seahawks at Packers – The Revenge – will keep Sunday Night Football entertaining.  No word on whether the Packers plan to deflate any footballs, but the line has them giving 3.5, so we’re just saying.

Tweet of the Day: Ann Coulter tries to clarify her ‘f**king Jews’ tweet
Next Post
Snort of the Day: Jeb! goes tippy-toe in seeming attempt to tower over fellow candidates 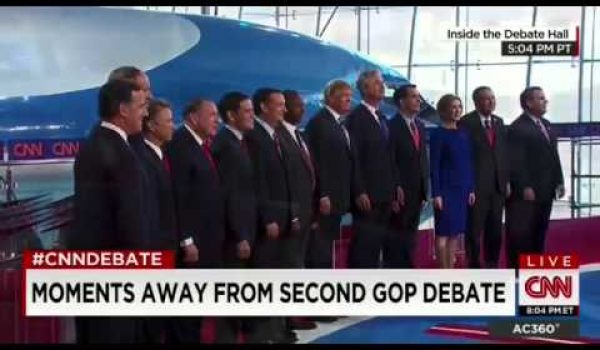