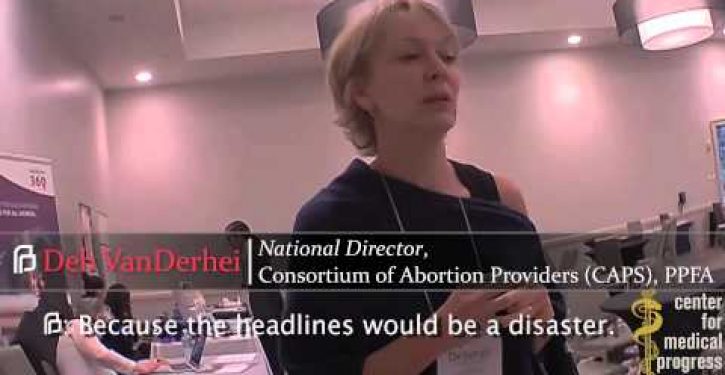 On July 21, after the Center for Medical Progress released its first video exposing some of the more abominable practices of Planned Parenthood, FactCheck.org ran a hit piece titled “Unspinning the Planned Parenthood Video.” In it, four experts in the field of human tissue procurement were interviewed about the price range for harvested organs discussed in the video — $30 to $100 per patient. One of the interviewees was Sherilyn J. Sawyer, director of Harvard University and Brigham and Women’s Hospital’s “biorepository,” who insisted, “There’s no way there’s a profit at that price.”

Here’s hoping FactCheck recalls that expert witness for its rebuttal of the latest CMP video, which addresses the issue of profit for the sale of fetal organs in greater detail than any previous video. In it, Deborah VanDerhei, National Director for the Consortium of Abortion Providers (CAPS), openly acknowledges that “we have independent colleagues who generate a fair amount of income doing this.”

In the program notes accompanying the video, CMP writes:

VanDerhei suggests that Planned Parenthood goes to great lengths to avoid leaving a paper trail about their fetal tissue activity: “It’s an issue that you might imagine we’re not really that comfortable talking about on email.”

Defenders of Planned Parenthood will watch the video (or not) and again try to wriggle free of the damning implications. But it is getting increasingly difficult to put a positive spin on conversations like the one between Vanessa Cullins, Planned Parenthood’s vice president of external medical affairs, and a prospective buyer. Urging discretion Cullins says:

This is important. This could destroy your organization and us, if we don’t time those conversations correctly.

Politically correct speech codes on campus ridiculed by … WHO?
Next Post
Cartoon of the Day: Artificial intelligence