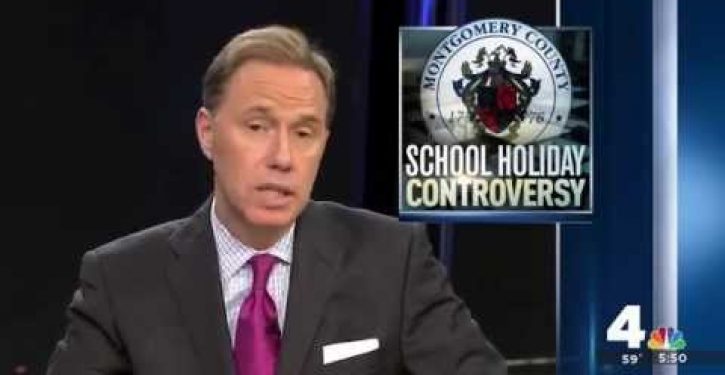 The Jewish New Year starts this weekend, and the week after, Jews will fast for 24 hours as they reflect on their sins during Yom Kippur, the Day of Atonement.

Jewish families living in Montgomery County, Md., can choose to have their children observe this holiest of days by attending services with them at their local synagogue, though they will need to write notes for the kids explaining why they missed school. In past years, the schools would have been closed for this pious occasion. But that was before Muslims complained that their holiday, Eid al-Adha, didn’t get equal time. So in a gesture of appeasement, the school board stripped all religious holidays from its calendar.

When the issue was raised last year, Montgomery County Schools Superintendent Joshua Starr moved to delete references to Yom Kippur and Rosh Hashana from the calendar. But board member Rebecca Smondrowski suggested removing all religious references.

“It is about equity,” Ms. Smondrowski told MyMCMedia, according to the Washington Times. She added:

I made the motion because if we are closing for operational reasons, then there should be no need to make reference to religion. That is the most equitable solution that I could see while recognizing that we need to be seriously addressing the criteria for how these things are decided in the future.

Equity? Not according to figures provided by City-Data.com, which show that the Muslim population in Montgomery County is about a fifth the size of the Jewish population and a blip on the radar when compared with the percentage of residents who practice Catholicism or another Christian denomination.

School employee Samira Hussein, who also has children at the district, has been urging it to add Muslim holidays to the calendar for the past 20 years, according to NBC Washington.

“The Eid is just the same exact as Christmas day or Easter day or Yom Kippur,” she said. “The children want to [sic] home with their families. This is a family holiday that God designated and gave us the time to celebrate and be joyous.”

The Council on American-Islamic Relations has joined Hussein’s campaign in recent years. An email sent by CAIR to its members reads:

Last year, CAIR began an “Equality for Eid” campaign, including a petition drive, to urge Montgomery County Public Schools to close on Eid al-Fitr as well as Eid al-Adha.

Now, CAIR is urging Starr to add Muslim holidays to the school calendar without removing other holidays celebrated by other faiths. The group is also calling on parents to contact the school board ahead of Tuesday’s meeting to share their opinion on the issue, as well as attend the meeting itself.

But it’s really more of a logistics problem than it is a religious one. From NBC:

Montgomery County Public Schools have closed for the Jewish high holidays since the 1970s because of the county’s large Jewish population in the county would create a high absenteeism rate in the county.

“High absenteeism is the main reason” for schools being closed on the Jewish high holidays, Montgomery County Public Schools Public Information Officer Dana Tofig told NBC. “The absentee rate on the Eid holidays, when they’ve fallen on a school day, haven’t been considerably higher or lower than it is on any other given day.”

But removing all religious references from the calendar wasn’t what Muslim leaders had in mind.

“What we’re asking for is… to also have both the Jewish holiday and the Muslim holiday Eid al-Adha both be recognized on the school calendar,” said CAIR’s Maryland Outreach Manager Zainab Chaudry.

That often happens when you complain — no one walks away happy.

This post is based on an article that ran previously at LU. The majority of it was compiled and written by Mike Dorstewitz.

Navy Sec claims study showing men superior to women in combat is biased
Next Post
As we move further from 9/11, Americans are being duped into sympathizing with terrorists