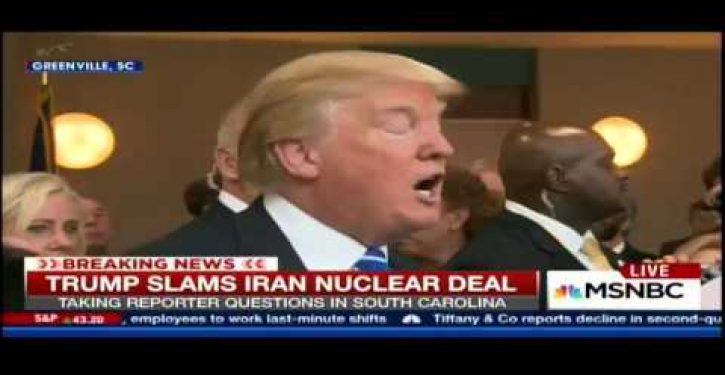 According to the latest Real Clear Politics average, Donald Trump continues to pull away from his nearest contender in the race for the GOP nomination for president. Nevertheless, abundant time remains between now and the Republican primaries. A lot can happen in that period.

Yet, developments in the last week point to the possibility of who Trump might choose to be his runing mate in the event he does win the nomination. Trump told reporters on Thursday that he and friendly presidential rival Ted Cruz (R-Texas) were planning to do “something very big over the next two weeks in Washington.”

It seems that the two candidates will join forces to protest against and bring awareness to the terrible and incompetent Iran nuclear deal that the Obama administration has completed with the evil and fascist Iranian regime.

Cruz may be the one GOP candidate that seems to have a warm relationship with Trump, who went out of his way to call Cruz a “friend of mine and a good guy.”

The Cruz campaign later told The Blaze that the Texas Republican “has invited Donald Trump to join him on the Capitol grounds for a rally to call on members of Congress to defeat the catastrophic deal that the Obama Administration has struck with the Islamic Republic of Iran.

Hillary Clinton one-ups herself in vulgar characterization of opponents
Next Post
IG report: Rate of abuse among people in charge of veterans’ benefits will shock you