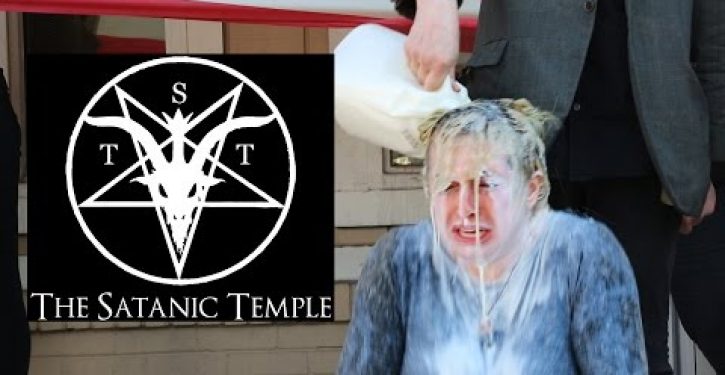 The mainstream national media missed some drama on Saturday when they failed to cover the thousands of people who showed up in over 300 places to protest Planned Parenthood.

One opportunity they missed was the counter-protest mounted by the Satanic Temple in Detroit.  Barbara Boland reports:

Clad in black robes, members of the Satanic Temple of Detroit drenched bound women with milk, simulating water-boarding to “illustrate the theocratic agenda imposed upon female bodies.” The milk symbolized breast milk, one of the protest organizers explained on Facebook.

The group attached a symbol of their temple to the American flag and held up a sign that read, “America is not a theocracy. End forced motherhood.”

Besides placing the Satanic pentagram symbol over the stars (the Union) on the American flag, the video shows one of the “priests” carrying a crucifix.

Boland also notes the belief – evocative of Saul Alinsky’s notorious dedication of his book Rules for Radicals – that Satan is an “eternal” symbol of rebellion against tyranny:

The man in the yellow T-shirt is apparently the pro-life protester who, according to Boland, tried to break up the Satanic group and get them to move along.  He moves in to confront the group near the beginning of the video.

Satan worshipers have shown up before to advocate for abortion.  On a particularly memorable occasion, in July 2013, they chanted “Hail, Satan!” in a counter-protest in the Texas state capitol building, as pro-life demonstrators sang “Amazing Grace.”

Also worth noting is the symbolism of the “mother’s milk” theatrics.  There were other ways to represent water-boarding – starting with using water.  Using milk, which for human females comes when a child has actually been born, certainly looks like an attempt to subvert the very message of life being emphasized by the pro-life demonstrators.

It is thus interesting to consider this counter-protest in light of the injunction in the Law of Moses against boiling a goat kid in its mother’s milk.  (See Exodus 23:19 and 34:26, along with Deuteronomy 14:21.)

The conclusion in this forum about the goat’s milk prohibition is that it was morally disgusting to God to “commingle life and death” – which in itself is illuminating about the Satanic Temple’s intentions.  Some participants also mention records that indicate a (then-) contemporary pagan ritual of boiling a kid in its mother’s milk, as a likely prompt for the Mosaic prohibition.  Maimonides, the great Jewish exegete, reportedly took this point as dispositive.  (One forum participant believes he has debunked this data point quite thoroughly, however.  We report, you decide.)

The use of mother’s breast milk in death rituals cropped up elsewhere in the pagan world, with the report of the ancient Romans ritually “feeding” breast milk to the deceased, to symbolize an anxious desire in the living to see the dead come back to life.  This was said to have been done in the name of the goddess Nenia, the deity of funerary ritual, and on some occasions to have involved nursing mothers beating their breasts until both milk and blood flowed out.

There is nothing morally sanitary about pushing for abortion on the basis demanded by Planned Parenthood and its supporters.  Nor is there anything enlightened about the “beliefs” of Satan worshipers who increasingly show up to demonstrate for abortion.  The remarkable aspect of our time is how clearly that truth is being shown to us.

BREAKING: Dow in uncharted territory with 1,089-point drop on Monday – so far
Next Post
Gack: OK Labor Commissioner stabbed to death at Braum’s in NW OKC