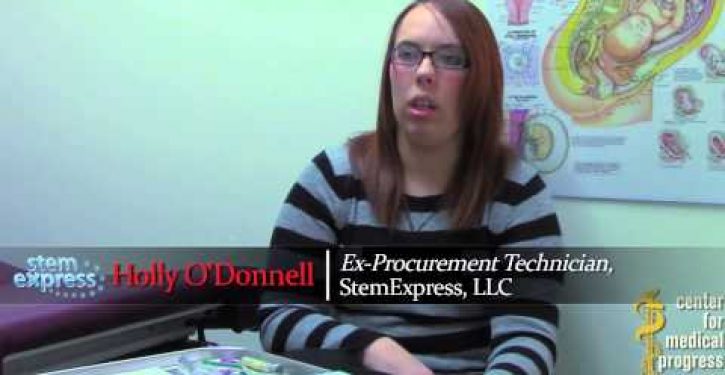 The seventh video of the inner, behind-the-scene affairs at a Planned Parenthood clinic has been released, and this exposé contains dialog so horrifying and graphic that you don’t have to view it to feel sick. In this latest release by the Center for Medical Progress, former medical technician Holly O’Donnell describes cutting through the face of a late-term male fetus in order to harvest its brain for research.

“And I’m just sitting there, like, what did I just do?” O’Donnell says in the video. “And that was the moment I knew I couldn’t work for the company anymore.”

O’Donnell’s job was to procure fetal tissue from Planned Parenthood clinics for StemExpress, a middleman between the aborted fetuses and researchers. StemExpress recently severed ties with the abortion provider as a result of the bad publicity it was receiving thanks to the videos.

O’Donnell would “consent” women — ask them to donate their fetus — and then pick through the remains for the wanted tissue.

“Even if it’s going to be good, if that could have been the cure for some kind of disease … even if it was, I wish I still wouldn’t have done it,” she adds, referring to the time she procured brain from the male fetus. “I don’t want to be that person.”

O’Donnell was in training at the clinics when another technician instructed her to cut through the face of an aborted 20-week male fetus.

“She’s like, okay I want to show you something,” O’Donnell says in the video, describing what happened. “So she has one of the instruments, and she just taps the heart and it starts beating.”

The heart of a fetus starts beating a week or two into gestation.

“It had a face,” O’Donnell says. “It wasn’t completely torn up, and its nose was very pronounced. It had eyelids, and its mouth was pronounced. And since the fetus was so intact, she said, ‘okay well this is a really good fetus, and it looks like we can procure a lot from it.’”

Some clinics use a drug called digoxin to kill a late-term fetus before removing it from the womb, in part to prevent an illegal live or partial-birth abortion. But the drug makes the cells invaluable for research, and its safety is disputed. The clinics O’Donnell worked in apparently did not use the drug.

“She gave me the scissors and told me that I have to cut down the middle of the face,” O’Donnell continues. “And I can’t even describe like what that feels like.”

“And I remember picking him up with the gloves, because it was too heavy the pie dish was and he was big,” she adds. “… I couldn’t take it and put it in the strainer … it was just too big. And I opened the biohazard container and it’s almost full.”

“And I remember he got stuck on the lid,” she adds. “And it turned around and his buttocks was in the air and his two feet were like dangling out, and I remember having to pick each one of his feet up and put him in the container and close the lid.

“And that was the hardest experience I’ve had there.”

“I feel like its a waste of life,” she adds. “And it’s sad that so many people view it as a mistake. Life isn’t a mistake — I mean getting pregnant can be an accident — but it’s not a mistake.”

Gov’t email addresses end up in some strange places, but this one takes the cake
Next Post
More coal bankruptcies: Are President Obama’s wishes coming true?