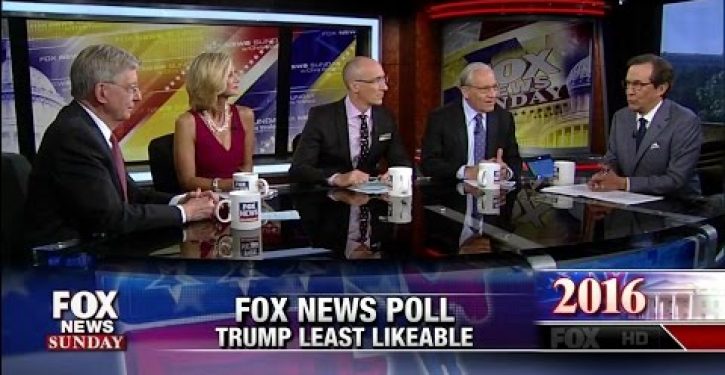 I don’t know if D.C. Comics is currently working on a superhero who pronounces “huge” as “yooj,” but one has emerged in real life. He even has a superhero-type name — The Donald — and he is impervious to bullets fired by conservatives, liberals … and even independents. Libertarian Matt Welch began an article yesterday at Reason with this zinger:

Fox News has a new national poll of registered voters that I intend to bookmark, print out, frame; perhaps even get tattoed in a nether region. With the usual caveat that early national presidential polls have little predictive utility on the nomination, here are your current post-first-GOP-debate faves among likely Republican voters:

Welch goes on to list the candidates, among whom Trump has a double-digit lead.

Here’s the result of another Fox News poll — this one shared on Fox News Sunday, where a panel of experts that included George Will, Arthur Brooks, of the American Enterprise Institute, and Bob Woodward, of Watergate fame weighed on the Trump phenomenon:

To make sure the message “took” with viewers, Brooks called Trump supporters “low information voters.” Here’s a clip from the show:

How much has any of this hurt Trump, who on Saturday gave helicopter rides to children at the Iowa State Fair? Consider: On Sunday, around the same time the Fox News panel was dissing Trump supporters, veteran Alabama lawmaker Jeff Sessions, chairman of the Senate Judiciary Committee’s subcommittee on Immigration and the National Interest, released a statement praising Trump’s immigration proposal:

This is exactly the plan America needs. Not only would the plan outlined in this paper work, but more quickly than many realize. Most importantly, this plan reestablishes the principle that America’s immigration laws should serve the interests of its own citizens. For too long, ‘immigration reform’ plans in Washington have served the special interests at the expense of working Americans.

Trump’s plan, which is multifaceted, can be found on his campaign website, Or, if you’re pressed for time, here is the abbreviated version as articulated by the candidate himself: “We will keep [illegal immigrant] families together. But they have to go.”

Call it Trumpspeak if you like. Some voters are calling it refreshing.

Patriot missiles being removed from Turkey were hacked, given ‘unexplained orders’
Next Post
How does Trump stack up against Hillary when it comes to women in the workforce?