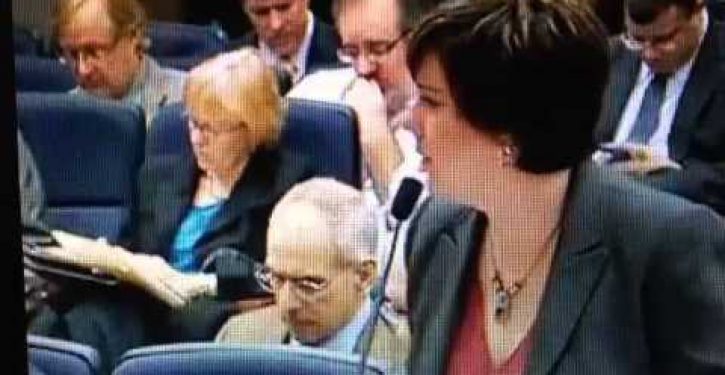 [The following is a reprise of an article that ran at LU in March 2013, around the time that Philadelphia abortionist Kermit Gosnell was on trial for murder. The piece seemed relevant then because of the rift between the right and left over the Gosnell case. It seems even more relevant now in the wake of the horrors revealed by the undercover videos exposing Planned Parenthood’s sale of fetal body parts.]

Even as a Philadelphia abortionist stands trial for murder for having severed the spinal cords of babies born alive, a lobbyist for Planned Parenthood is attempting to persuade Florida lawmakers that health providers presiding over botched abortions should finish what they started.

The Weekly Standard has details:

Florida legislators considering a bill to require abortionists to provide medical care to an infant who survives an abortion were shocked during a committee hearing this week when a Planned Parenthood official endorsed a right to post-birth abortion.

Alisa Laport Snow, the lobbyist representing the Florida Alliance of Planned Parenthood Affiliates, testified that her organization believes the decision to kill an infant who survives a failed abortion should be left up to the woman seeking an abortion and her abortion doctor.

The video below captures the exchange between state congress members and Snow. The transcript follows.

REP. JIM BOYD: So, um, it is just really hard for me to even ask you this question because I’m almost in disbelief. If a baby is born on a table as a result of a botched abortion, what would Planned Parenthood want to have happen to that child that is struggling for life?

SNOW: We believe that any decision that’s made should be left up to the woman, her family, and the physician.

REP. DANIEL DAVIS: What happens in a situation where a baby is alive, breathing on a table, moving. What do your physicians do at that point?

REP. JOSE OLIVA: You stated that a baby born alive on a table as a result of a botched abortion — that that decision should be left to the doctor and the family. Is that what you’re saying?

SNOW: That decision should be between the patient and the health care provider.

OLIVA: I think that at that point the patient would be the child struggling on the table, wouldn’t you agree?

SNOW: That’s a very good question. I really don’t know how to answer that. I would be glad to have some more conversations with you about this.

It seems from her answers that Snow hasn’t thought very long and hard about the “reproductive rights” of all the patients involved. That should be unsettling to any fair-minded thinker, regardless of his stance on abortion.

Hillary not the only Obama administration official in hot water over private emails
Next Post
Cartoon bonus: Trump vs. media