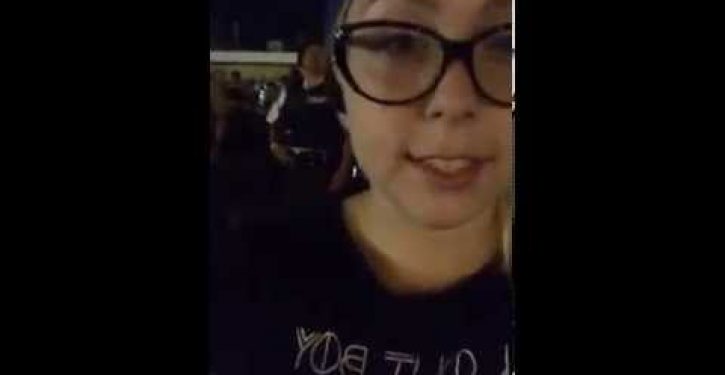 Lexi Kozhevsky, a 19-year-old nursing student at St. Louis University, made the decision Monday night to head over to nearby Ferguson, where angry demonstrators were reenacting the protests of 2014, right down to the looting. Kozhevsky was there out of solidarity — but not with those who were hurling rocks, bottles, and obscenities at the police. Instead, she symbolically formed her own blue line.

As the photo in the tweet below illustrates, Kozhevsky courageously took up a position some 30 feet in front of the police, prompting officers initially to approach her and ask what she was doing. When she explained that she there was to protect them, they asked her if she was sure she wanted to put herself in harm’s way. She replied in the affirmative.

Lexi, 19, stands to protect cops, "I would rather get hit by something than let it hit them." #Ferguson Pic-@PDPJ pic.twitter.com/gF4lLSqAjx

“Not all cops are bad,” she is quoted as telling TheBlaze. “And that’s just what upsets me. When I call someone if someone robs me, I call the police.”

That’s what we all do, as any grownup can tell you. After two members of the NYPD were shot to death in their car in 2014 as a reaction to the Michael Brown shooting, residents of the Brooklyn community where the ambush occurred complained in the weeks following that the police presence in their neighborhood had diminished. Cops on the beat have similarly grown more scarce in Baltimore since the full frontal attack on the police there in the aftermath of the death of Freddie Gray.

Lexi Kozhevsky, who appears to be wise beyond her years, seems to understand this simple application of Newton’s third law, telling TheBlaze:

That’s not the way to make progress … reach out to government officials, start petitions, make a change. But don’t be violent. It hurts the community more than anything.

Here is a short Snapchat video she made: